Due to warehouse construction, order fulfillment is currently delayed. Our warehouse staff is working double-time to expedite order fulfillment. Orders will be processed in the order they were received. Thank you for your continued patience.

Product has been added to your cart

What Customers Are Saying About Universal Waite® Tarot Deck

About the Universal Waite Deck

Dr. Arthur Edward Waite (1857–1942) was a genuine scholar of occultism whose published works include The Holy Kabbalah and The Key to the Tarot first issued in England in 1910. Waite utilized symbolism as the key to the Tarot pack. In The Key to the Tarot he writes: “The true Tarot is symbolism; it speaks no other language and offers no other signs.” What are the Tarot cards about which Waite so skillfully writes? What is the message of each card and when and where did these fascinating cardboard symbols first originate?

In the year 1369 playing cards are not mentioned in a decree issued by Charles VI of France against various forms of gambling; however, 28 years later, the Prevot of Paris, in an ordinance dated January 22, 1397, forbids working people from playing tennis, ball, cards, or ninepins excepting only on holidays. It is generally accepted that playing cards emerged in Europe in the latter half of the fourteenth century, probably first in Italy as a complete 78-card deck—or some inventive genius subsequently combined the common 56 cards known as the Minor Arcana with the 22 esoteric and emblematic Tarot cards known as the Major Arcana to form the 78-card pack.

During the fifteenth century Tarot cards were generally drawn or hand painted for the princely houses of Northern Italy and France. Subsequently, the card packs became more numerous because they were reproduced by techniques using woodcuts, stencils and copper engraving. By the sixteenth century a modified Tarot pack called the Tarot of Marseilles gained popularity.
Today, there is currently a phenomenal interest in Tarot fortune-telling cards. The serious investigator seeks to employ the cards as a means of placing the past into more meaningful perspective, understanding the present, and revealing the alternatives that exist in the future. Those less acquainted with Tarot cards are content to use them as a game and to indulge in readings at parties or in small private groups. From the collector’s standpoint, Tarot cards are both colorful and interesting.

Tarot decks are currently sought by teenagers, students, homemakers, businessmen, professional people, collectors—indeed, persons from all walks of life. Newspapers, magazines, radio, and television frequently comment on the Tarot vogue. Teenagers enjoy Tarot parties. Adults attend Tarot luncheons, charitable benefits, and Tarot picnics at which card readings are performed. Hollywood has even indulged in the growing trend with “popular” Tarot readers being present at parties to service the well-known guests.

One of the fascinating aspects about Tarot cards is their personal effect upon the individual who uses them. Waite successfully presents a new dimension to their meaning in The Key to the Tarot. Any Tarot reader, be they a serious scholar or a person dabbling in the occult, will benefit from Waite’s insight and keen perception. 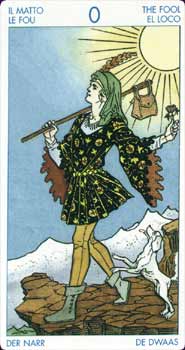 The Universal Tarot is a multi-lingual basic tarot deck suitable for beginners. Pamela Colman-Smith's Rider-Waite images have been recoloured and redrawn in a more Italian, dynamic style.

Looking for a Rider-Waite style tarot deck but not keen on Pamela Colman-Smith's original drawings? Take a look at the Universal Tarot, a deck in which the legendary images have been reinterpreted in a more refined, realistic and modern style.

Redrawn by Roberto de Angelis, an Italian painter and comic illustrator, the Universal Tarot keeps closely to Rider-Waite imagery and esoteric symbolism but does not exactly replicate the art in the way of clone decks like the Albano-Waite Tarot or the Colman-Smith Tarot.

The symbols, layout and scenic positions of the Universal Tarot are very similar to the Rider-Waite, but the pen-and-ink lines have been drawn with a lighter hand than the standard RW and the colours are paler, more real. There is also more detail in the images, as though the focus had been sharpened. Faces have more individuality, the sky has blended colour variations, extra objects have been added and the perspective sometimes changes to give the cards a more photo realistic illustrated effect. Fashion styles and people have a more dramatic, Italian look.

The tarot scenes are constrained by a thin white border, on which the titles and numbers are printed in pale blue ink. The titles are printed in six languages: English, Italian, French, Spanish, German and Dutch. The backs of the cards are a reversible white and purple design, and bear an eight-pointed star in a circle motif repeated on the back eight times.

The LWB is the usual foldout leaflet provided with Lo Scarabeo decks. It has a timeline of tarot history, a nine card spread called 'Search for the End' and a list of basic keywords to explain each card. An excerpt of the text for the major arcana:

For more experienced readers, all the card meanings are probably superfluous. For beginners, I would definitely recommend a generic instruction and interpretation book like Learning the Tarot to assist reading with these cards.

It's faithful to the esoteric and occult symbols of the Rider-Waite images, but displays them with a little more heroism, more dynamism, and more emotion. The Universal Tarot deck, with its multi-lingual titles and attractive artwork, is a very suitable alternative.

What are Tarot Cards?

Tarot cards are small, paper cards that come in a deck, similar to playing cards, and are used for divinatory purposes. Each card represents a different archetypal being or lesson. A person shuffles the cards, then lays them out in a Tarot card spread. Understanding what each Tarot card means when it is revealed can help a person receive an important message or embrace a new perspective in any situation.

How many cards are in a Tarot deck?

There are 78 Tarot cards in a complete deck. The first 22 are called the Major Arcana Tarot cards. The remaining 56 Minor Arcana cards are divided into four suits: Wands, Cups, Swords, and Pentacles. Each suit contains 14 cards, including 10 numbered cards plus a Page, Knight, Queen, and King.

How do you read Tarot cards?

There are four basic steps when you’re reading Tarot cards: First, consider your question, then select a Tarot spread with positions that relate to that question. Next, you'll shuffle the cards and lay them out in that spread, and finally, interpret the cards to answer your question. Anyone can learn how to read Tarot cards. There are many spreads available online to inspire you, and you don’t have to have the meaning of every card memorized -- you can look up the meanings by clicking on the cards above! Still, the traditional meaning of the Tarot cards is only part of it -- it's your own emotions and intuition that will help you understand how the cards that are revealed apply to your unique situation.

How do you shuffle Tarot cards?

Shuffling the Tarot cards before a reading is essential. It allows you to focus on why you’re doing the reading and to imprint your energy on the cards. Before shuffling, take a moment to relax and tune in to your intuition. Then, mix up the cards in any way that feels right -- cut or fan the deck over and over, or simply jumble the cards on the table and put them back together. There is no wrong way to shuffle your Tarot cards. No matter how you shuffle, it’s the intention that really matters. As you shuffle, be present and truly focus on the question for which you need answers.

Certainly not. Tarot cards rely on your intuition to shuffle and select the cards and to understand how they apply to you -- there is no evil force guiding them. If you’re wondering “Are Tarot cards safe?” then the answer is yes, absolutely. They are not meant to bring forth spirits or bad luck, they are intended to inspire awareness and help you discover healthy and successful ways to approach any part of your life.

Where to buy Tarot cards

While there are Tarot card decks available in many specialty shops and online, we have a huge selection of Tarot decks right here on Tarot.com that is unlike any other on the Internet! From deck information to the individual card artwork in each deck, we're sure you'll find one that's just right for YOU. Once you see one you like, just click Buy This Tarot Deck!

You don’t have to do a major reading to benefit from the wisdom of Tarot cards. A Daily Tarot card provides valuable insight into the energies influencing you at this very moment -- or guidance for any situation that will unfold for you throughout the day. The advice of just one Tarot card a day can help you approach whatever is happening to you with greater clarity and empowerment.

I tried to shove it into this pink hole. But I didnt succeed. Then I guessed that I needed to lubricate with something slippery. I said, Wait, "and ran for my mothers cream from When I lubricated Max's hole with it, I saw how his cock began to slowly rise. like it !, I thought.

Massage my clitoris, labia and vaginal opening, he did it so gently that I began to flow even harder, the doctor noticed it and it seemed to me that he began to massage my crotch even more. I could hardly restrain myself so as not to moan: Then he took some kind of ointment and began to rub it all.

Over my pussy and vagina, his fingers thrust deep into me rubbing the lubricant, everything was very squishy and slipped from my secretions and this ointment.

He rotates his finger in my rectum again, pushing it out and pushing it deeper, and it has a very pleasant feeling in the oiled rectum. "You have to hold on to the oil for a while. Lie on your tummy, I'll be back soon.