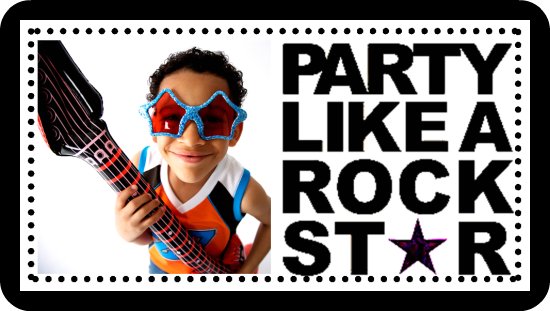 Looking for cool games to play at your kids rock star birthday party or Diva Party? Let your child and their friends take center stage and show off their stuff with these rockin’ party games below for fun D.I.Y games and party activities.

In this first game players layers bop around a balloon while the music is playing, when the music stops the player holding(or last touched) the balloon must pop it and answer the lyric clue inside. Add  a new lyric balloon and continue playing.

ALTERNATIVE: Instead of lyric clues you can put fun dares.

Check out my free list of truth or dare questions to get some fun ideas for dares.

Diva / Rock Star Birthday Party Games
Who Am I?

Write names of famous rock stars on to post-it notes and stick them on the back of each players shirt. No one is allowed to see which rock star they got. They must talk to others and ask yes or no questions to try and figure out who they are.

This rockin party game is a fun twist on the classic piñata. You, or another adult, pose as the paparazzi. You’ve taken one too many unwelcome pictures and now the rock stars are after you. Every time you get tagged you must freeze and throw out some swank (candy from your bag of goodies). When the children are rushing to collect it you can make your escape. Keep playing until all your “swank” is gone.

This is kind of an obvious choice for a rock star birthday party, but it should definitely be considered. If you already own a karaoke machine that’s perfect, if not you might be able to borrow one from a friend or rent one. Make sure you have music suitable for the age group of your party. You can just go free style and let whoever wants to sing have a go, or you can divide kids into groups of two or three. Give them minutes to practice a song and maybe come up with a move or two and then let them perform in front of everyone. Create a stage from sheets and colored lights to add to the fun.

Limbo Time! Everyone loves to limbo. Use a feathered boa to add some rock star pizzazz to this classic game. After they go as low as they can go see how high they can go by playing it in reverse and having the children jump over it.

In this rock star party game the guests dance,dance, dance while the music is playing, when it stops, everyone must FREEZE. Anyone caught moving must sit out until the next round.

Set the mood for your rock star birthday party with these fun activities. Set up different stations for them to transform into a rock star themselves when they first arrive. You can find some awesome (and I mean cheap) deals at the dollar store, Wal-Mart, or for online super deals try Birthday Express or Oriental Trading. Some cool ideas for different stations:

Games Station 1: Tattoo Parlor: Have a assortment of different temporary tattoo’s for the guests to choose from and put on.

Games Station 2: Hair Salon: Have someone ready to do the guests hair up rock star style. You can even use some temporary color spray. You can provide an alternative like wigs, bandana’s, or funky hats for them to choose from.

Games Station 3: Nail Tech: Here the guest can have their nails painted or have nail stickers applied to give them some extra pizzazz.

After they are finished you can have everyone show off their rock star look by walking down the red carpet. For a red carpet you can purchase red plastic table covers from the dollar store and tape them together.

Write down the chorus from a popular song (one that most of them would know) onto index cards. One word for each index card. You’ll need to create two sets of the lyrics and put each on a different colored index card. For example one red set and one blue set. Hide the cards throughout the playing area. To play divide the kids into two teams (a team for each color). They must find all the index cards for their team and be the first to put them together in the right order and sing it. This is a funtastic rock star birthday party game.

Prepare a bag full of fun dress up items such as funky hats, sun glasses, boas, scarves, head bands, stickers, wigs etc.. Have the children pass the bag around in a circle while the music is playing. When the music stops they must reach into the bag and pull out an item then put that item on. Keep playing until the bag is empty.

This fun rock star activity will get your guests rockin'! To begin, cut out guitar shapes from colored poster board before the party (one for each guest).

At the party, let your guests “make” their own guitars by decorating the poster board guitars with markers, glitter pens, , decals and stickers. They may want to autograph each others' guitars, too!

Have guests sit in a circle. Get them to pass a play microphone around while music is playing. When the music stops, the one holding the microphone must sing a short part from his or her favorite song. Play until everyone has had a chance to sing.

In this creative rock star birthday party game the players break into groups, and each group must draw a song title out of a hat and they have 20 minutes to create new lyrics to go with that title.

Each guest shows off one of their favorite dance moves and the others try to copy it. Let each guest that wants to have a turn teaching a cool move. Record everyone showing off and put together a Diva / Rock Star movie for everyone to take home.

Have the kids split into their groups. The object of the game is to guess what artist sang the song. For each artist name up to ten of their songs until they are guessed correctly. You can find a list of songs just by using Google or BING to search for the artist name followed by list of songs.

Prepare lyric clues ahead of time. These can be simple lines of popular songs with a word or phrase missing from them. Read the clues aloud and have the players try and fill in the blanks. This game is best played in teams.

Prepare ahead of time a bunch of popular songs. Play the first few seconds of a song, and see which guest can name that tune the fastest. You can also have the guests play in teams. You can give a bonus point if they can also name the artist who sings the song.

The Most Amazing Rock Star Party For Kids

This post contains affiliate links. We may earn money from the products mentioned in this post, but this is at no cost to you, and helps bring you more creative projects. Thank you for supporting Smart Party Planning.

The ultimate rock star party that all kids are going to love. With easy decoration and food, these ideas will be a lot of fun.

This is a rock star party that you won&#;t want to miss. Dig out that guitar and start feeling the beat!