Inside Fort Dawnguard when you speak with the members inside they will comment that Florentius has something for you.  When you speak with him he tells you that he has been looking over some of the old tomes that the old Dawnguard left in the fort and has come across an artifact that will greatly help.

You can also begin this quest by randomly finding the relic in which you begin the quest with the 2nd Objective - Return to Florentius Baenius.

In This Wiki Guide

Bethesda Game Studios' blockbuster open-world RPG puts players on the precipice of determining the future of Skyrim as the Empire waits for the prophesized Dragonborn to come; a hero born with the power of The Voice, and the only one who can stand amongst the dragons.
Sours: https://www.ign.com/wikis/the-elder-scrolls-5-skyrim/Lost_Relic
Every time I try to talk to him to initiate the quest he just tells me to speak with gunmar. How many damn gunmar quests do you have to do before Flo gives you a lost relic quest?

It's random. Try doing quests from the npcs.

Is there a way at least to save and reload until I get the quest I want though?

It might work if you save before turning in a quest. Turn in quest then reload if lost relics isn't offered... worth a try.

Gotta do 5 raidiants in between each Lost Relic quest unfortunately.

Gah!!! 5?? That's insane. I think I will be enabling fast travel/novice difficulty for this.

It might work if you save before turning in a quest. Turn in quest then reload if lost relics isn't offered... worth a try.

This actually does work. Tried it last night, kept saving and reloading till I got rune hammer quest. You have to save right before you turn in your current quest.

RNG, but hope the rescue missions don't pop up. The person you must rescue will always die if they are not essential or protected. 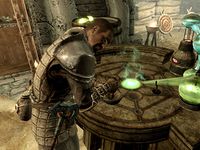 "I've been pouring [sic]over some of the tomes left here in the keep."

Speak to Florentius Baenius after you have completed the first Ancient Technology quest and a number of either Gunmar's or Isran's side quests. Florentius, guided by the wishes of Arkay as usual, will inform you: "I've been pouring [sic]over some of the tomes left here in the keep. Interesting stories, indeed. Seems the previous incarnation of the Dawnguard had, at one time, some interesting toys. Arkay and I think it could be a great advantage for us. You should look into retrieving it." There are three parts to this quest, each appearing as a new quest of the same name in your journal. Florentius will recite what was written in the old tomes for each of the three artifacts:
Dawnguard Rune Hammer: "A powerful warhammer imbued with magic that places warding runes on the ground to obliterate it's [sic]wielder's foes."
Dawnguard Rune Shield: "A magical shield that when blocked with, surrounds it's [sic]wielder with a holy aura that harms the undead."
Dawnguard Rune Axe: "An axe imbued with magic fueled by the destruction of the unholy. With every victorious blow against an undead creature, its power grows."

For each version of this quest you will be told to go to a random dungeon from the table below, where you'll find the artifact in the boss chest. When you return each artifact to Florentius, he will allow you to keep it: "Well done! I said you'd return victorious, Arkay wasn't so sure. Wield it bravely."

Ron's face was on the alert, Come on, think faster, otherwise the father will notice that there is no wand. - What do you want me to do. - Nothing bad. George rolled his eyes.

Her heartbreaking cry echoed throughout the apartment. The body twitched and wriggled in pain on the bedroom floor covered with healthy black spiders that sucked it out. The soul of Veronica Klimova, carried away by the black winged Izufuil, dissolved between the two worlds. The world of the living and the world of the dead.

Her female soul, dissolving in black emptiness, still not realizing the hopelessness of her situation, was looking for a way out of the nightmare that.

But this is not a disease for commissioning, it is necessary to prove that I have every right to leave here straight home. This is my last hospital. Now or never.

It was the first month of summer. I, as usual, lived in my private house with my parents. I was 19 and of course I was constantly thinking about sex.