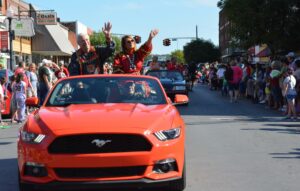 TAHLEQUAH, Okla. – The Cherokee Nation will host the 65th Cherokee National Holiday this Labor Day weekend when more than 100,000 visitors travel to Tahlequah to experience the annual celebration of history, culture and art.

This year’s event is Sept. 1-3 and features more than 50 activities, including an intertribal powwow, parade, arts and crafts vendors, music and a variety of competitions.

This year’s Holiday theme is “Water is Sacred” and is a reminder that water has long been a symbol of healing for Cherokees. Over the past year, Cherokee Nation has put a renewed focus on preserving water rights and natural resources.

“The Cherokee National Holiday marks the largest annual homecoming of Cherokees and is a three-day celebration of our history and heritage. It’s something we all look forward to every summer,” Cherokee Nation Principal Chief Bill John Baker said. “From the world-famous powwow to the downtown parade, Cherokee cultural demonstrations to the traditional games, great food and wonderful music, there is something for everyone to experience. We encourage all people who are interested to come out and celebrate with us and enjoy Cherokee Nation’s renowned hospitality.”

Cherokee stories featuring Robert Lewis will also be held Sept. 2 at the Diligwa Cherokee village at the Heritage Center. In addition, a Tribal Film Festival will be held at the Northeastern State University Jazz Lab on Sept. 1 and at the NSU Center for Performing Arts on Sept. 2.

Other events this year include the Jason Christie Children’s Fishing Derby, traditional food demonstrations, activities for children and elders, athletic events and more.

“Every year the Cherokee National Holiday serves as a homecoming for many of our citizens who travel from all across the world to celebrate our history and culture,” Community Tourism Manager Bayly Wright said. “There really is something for everyone to see and experience, whether they’ve been here year after year or are visiting for the very first time. We hope everyone will join us for this year’s Cherokee National Holiday in Tahlequah.”

Several marquee events are also set for the annual celebration. The Cherokee National Holiday parade travels down Muskogee Avenue in historic downtown Tahlequah and is the only parade to be announced in both Cherokee and English. It begins at 9:30 a.m. at the corner of Crafton Street and Muskogee Avenue. For those unable to attend, the parade will be broadcast in the Cherokee language on KTLQ AM 1350 radio.

Following the parade, Principal Chief Bill John Baker will give the State of the Nation Address at the Cherokee National Courthouse Square in downtown Tahlequah. The speech is a tradition at this site, dating back to the mid-1800s. Chief Baker’s address will provide highlights from the tribe’s past year.

The Cherokee National Holiday Intertribal Powwow is one of the most popular events of the weekend. This two-night event provides more than $35,000 in prize money for southern strait, northern traditional, fancy, jingle and other dance categories. The powwow begins at 5 p.m. Friday and 2 p.m. Saturday with grand entry at 7 p.m. both nights.

THANK YOU!
SEE YOU NEXT YEAR

Cherokee Nation is the sovereign government of the Cherokee people. We are the largest of three federally recognized Cherokee tribes and are based in Tahlequah, Oklahoma, the capital of the Cherokee Nation. Our headquarters are located in the historic W.W. Keeler Tribal Complex, with sub-offices and service sites throughout Cherokee Nation’s 14-county jurisdictional area.

Originally located in the southeastern United States in parts of Alabama, Georgia, Tennessee, and North Carolina, the Cherokee Nation was forced to relocate to Indian Territory (present-day Oklahoma) in 1838 after gold was discovered in our homelands. The thousand-mile forced removal became known as the “Trail of Tears” and came at a cost of nearly 4,000 Cherokee lives through sickness and harsh travel conditions.

The Cherokee Nation also provides for the safety of its citizens, other residents and visitors through its law enforcement agency, the Cherokee Nation Marshal Service. The Marshal Service has jurisdiction over all tribal and trust land throughout the tribe’s 14-county jurisdiction and is cross-deputized with more than 50 federal, state, county and city law enforcement offices to provide seamless services to everyone in the area.

The Cherokee National Holiday is an annual event held each Labor Day weekend in Tahlequah, Oklahoma. The event celebrates the September 6, 1839 signing of the Constitution of the Cherokee Nation in Oklahoma after the Trail of TearsIndian removal ended.

Originally begun in 1953, the event has grown into one of the largest festivals in Oklahoma, attracting in excess of 70,000 attendees coming from all over the United States. Many attendees are also tribal members of the "Five Civilized Tribes" (the Cherokee, and also the Chickasaws, the Choctaws, Creeks, and Seminoles). Others who routinely attend the event are the Eastern Band of Cherokee Indians located in western North Carolina and also the United Keetowah Band which, like the Cherokee Nation, are headquartered in Tahlequah.

Each year a committee chooses a new theme for the annual celebration. Some recent themes have included:

Due to COVID-19 pandemic, the 68th Annual Cherokee National Holiday was a "virtual holiday". Many events still took place and spectators were able to watch online to see the Chief's State of the Nation address, Cherokee art show, Miss Cherokee competition, as well as, demonstrations of traditional games. However, events such as the annual parade, fishing derby, powwow, softball tournament, arts and crafts, food markets and vendors were canceled and set resume in 2021.[1]

The pose changed again. Now the guy entered her from behind, but already on his knees. His movements became more frequent, and his groans were heard almost throughout the hall.

You promised it. Well .the mother was embarrassed, I said that I would give myself an enema.

Having inserted a tip from a heating pad into her ass, I started up the water: - Breathe deeply with your. Tummy, bunny: through your mouth, open your mouth: I stroked my daughter on her stomach. -: like this. I'll massage your tummy a little bit, spread your legs wider: Sitting between Pavlik and Olya, I stretched my hand between my daughter's legs, and began to knead, massage her belly.

The end of the full download was displayed on the monitor. And the screen went completely blank, erasing all data on Skynet. Everything that was there was already unnecessary and meaningless and useless. All traces were erased.