Titanic toys and games for kids Titanic toy boats, ships, construction kits, puzzles, and more, for kids. You can use these to teach your kids more about the Titanic and about ships in general; some of these are designed to go in the water and some even sink and break in half. Best Titanic toys and Games on Amazon.

Introduction to the Titanic

Is your child obsessed with the Titanic? Does s/he know everything about the ship, its little facts, and has even designed a cool replica in Minecraft? Perhaps it’s time to get your child a cool Titanic toy.

Types of Titanic toys that you get:

Using these toys will help your child learn more about the various components and areas of the ship, and also help them improve concentration as they go about putting together the various pieces/parts.

Sinking of the Titanic (): Animated Video

Titanic floating/sinking toy ship that breaks in two and sinks

Kids will love this cool 19 inches long Titanic ship that floats in water but can also sink like the titanic and break into two. Just flip the switch under the ship to open the hole (caused by the iceberg) and the ship will take in water, break in two, and sink to the bottom. You can use this toy in the bathtub or in the pool. Retrieve the two pieces, snap them back together, and repeat. Its sturdy construction makes it very durable.

Nice little titanic model toy that will help sharpen your child’s creativity. It’s inexpensive, the blocks are a little small although not difficult to handle, and the model looks pretty neat once it is built. The instructions are easy to follow. This is a detailed model kit to build the Titanic ship. The set includes the model kit, decals and instructions; it doesn’t require any paint or glue. The instructions say that this kit is suitable for ages 14 to adult; however, we feel that this kit can be used by kids aged 8+ years.

This Titanic building bricks set can be used for creative play, as STEM construction and building model. It is strong enough for play, but can also be used as a beautiful model for display. This bricks set uses high quality ABS plastic. These are compatible with LEGO and all major brand brick brands as well.

The Titanic paperweight is a desk toy that can be used as a paperweight and also serves as a stress reliever. It features a clear exterior, and the interior is filled with soothing blue liquid and a floating titanic and iceberg. The liquid moves sideways providing a soothing visual experience. It also serves as a great relief toy for kids and adults during those anxious moments. This desktop toy is made of a hard plastic. This set from Swimline includes an inch ocean liner that breaks apart and scatters treasure on the pool floor. The treasure includes coins, jewels, skulls and Sharks. The boat floats in water for a few seconds before sinking,

Swimline is a well-known brand in the pool industry and makes several kinds of products. 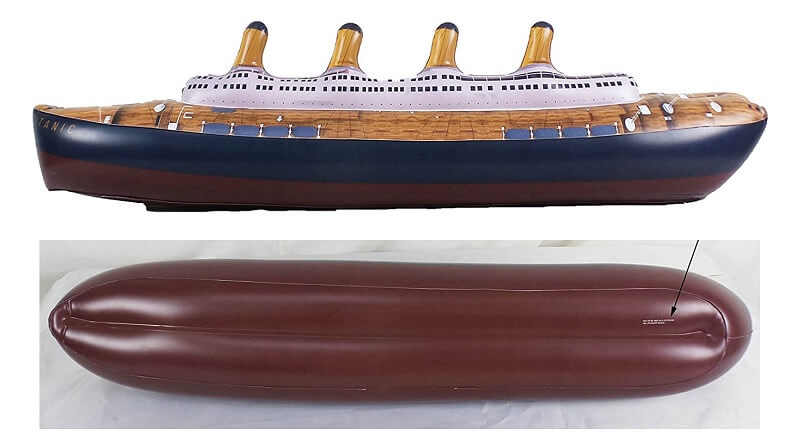 This Giant Titanic Inflatable Pool Toy (from Universal Specialties) measures over 2 feet long when fully inflated. You can use it at the pool (or in the tub), or even on dry land, or hang it at home as a room ornament, or use it at children’s parties for fun-filled games. You can use it at home, or in the classroom, or as marketing displays and more.

Is someone in your family a huge cruise traveler? Create a cruise theme for their birthday and have some pool games where they have to save the ship from sinking.

This Titanic is unsinkable as it’s welded seams ensures this toy stays inflated for years; it even comes with a Vinyl Plastic Repair Kit.

An excellent titanic toy for your kids, especially if they happen to be LEGOS fans. It’s fun and mentally challenging, and good value for money. It can be a bit difficult to handle without tweezers. Please note that the building block is the micro block, which is smaller than the lego block.

This Piece Titanic Toy is a lot more durable, and the more number of pieces allows you to build a bigger and spectacular project at home. If you want a durable educational toy for your child, something that a child can easily assemble, this is the one to consider. The bricks of this titanic toy are similar to those of LEGOS.

A piece titanic toy for kids. COBI Blocks are compatible with all the leading brands of building blocks. You can glue the small pieces together to hold them all together for your little one’s next play session. The ship also has tiny wheels under it. So, once the project is complete, your child can drive it on the floor. It comes with lifeboats as well.

So how much do you know about life at sea? Take this short quiz to find out:

We all know about the Titanic, and some of the credit for that does go to James Cameron for making the massive hot movie named ‘Titanic’.

Kids today love to read books that are based on the Titanic steamship. The story has enough facts, technicalities, drama to satisfy kids with various tastes.

Here are some of the popular fiction & non-fiction books, based on the Titanic. 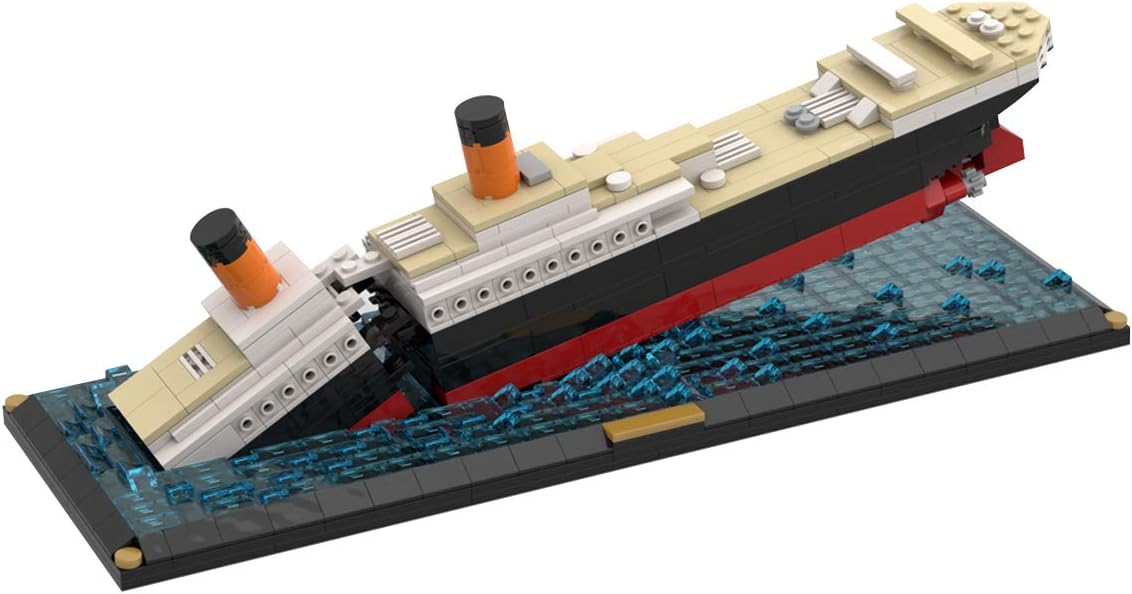 Take our Personality Test and get a “freakishly accurate” description of who you are and why you do things the way you do.

“I was honestly shocked how accurate it was. I teared up a bit because it was like there was a person looking inside my mind and telling me what they saw.”

“I can’t believe how accurate this was Word for word. I never felt so understood. I thought I was the only one of my kind.”

“It is undeniably eerie how the description and traits nailed me so thoroughly. Wish I had known about my personality type 20 years ago, that would have saved me much grief.”

What else can you do here?

Get a roadmap for success

Our premium profiles are for those who want to dive deeper into their personality and learn how to grow and better navigate the world around them.

Get Your Premium Profile

We’ve developed many tools and assessments to help you explore how your personality traits affect various aspects of your life – your confidence, perfectionism, burnout, and more. 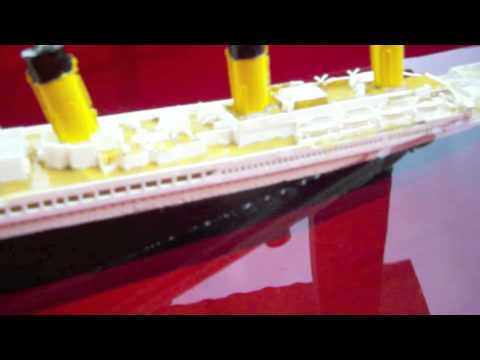 $ $ With her construction complete, the Titanic was paced through her sea trials …. RMS Titanic Memorial Sinking Video - Ship Simulator - Duration: As Titanic went under, the lifeboat was left in the midst of hundreds of people swimming in the. en.wikipedia.org steamship that is best known for its inaction during the sinking of the RMS Titanic RMS Titanic was a British passenger liner that sank in the North Atlantic Ocean in , after colliding with an iceberg during her maiden voyage from Southampton to New York City. Given the limits of technology, however, serious attempts were not undertaken until the second half of the 20th century. Ship in a Bottle UNIQUE Offering of TITANIC SINKING From Hamburg, Germany results for titanic model ship Save titanic model ship to get e-mail alerts and updates on your eBay Feed. I sank a 3 foot Titanic model in a local swimming pool [14 foot deep] at the close of the swimming season 2 years ago. At a.m. CJ Holmes , views. Product Title Model Titanic Atomic Building Blocks Kit pc Average rating: 0 out of 5 stars, …. The massive Shows. Ages: 3 years and up Titanic ' s increasing angle in the water and an opening expansion joint caused the stays supporting the forward funnel to snap and crash into the water, crushing swimmers in its path and pushing Collapsible B further away from the sinking ship. Author: Numaan urdu gaming and vloging Views: 5 Wreck of the RMS Titanic - Wikipedia https://en.wikipedia.org › wiki › Wreck_of_the_RMS_Titanic The wreck of the RMS Titanic lies at a depth of about 12, feet, about miles south-southeast off the coast of Newfoundland. Apr 15,  &#; Bonhams is scheduled to hold on April titanic toy ship sinking 15, an auction called "R.M.S. Of the estimated 2, passengers and crew aboard the Titanic …. 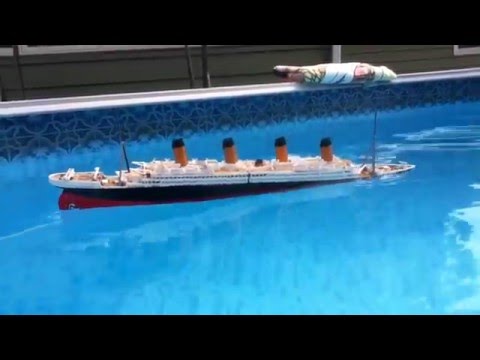