3 graphics were used to create this "becky the hedgehog" picture. 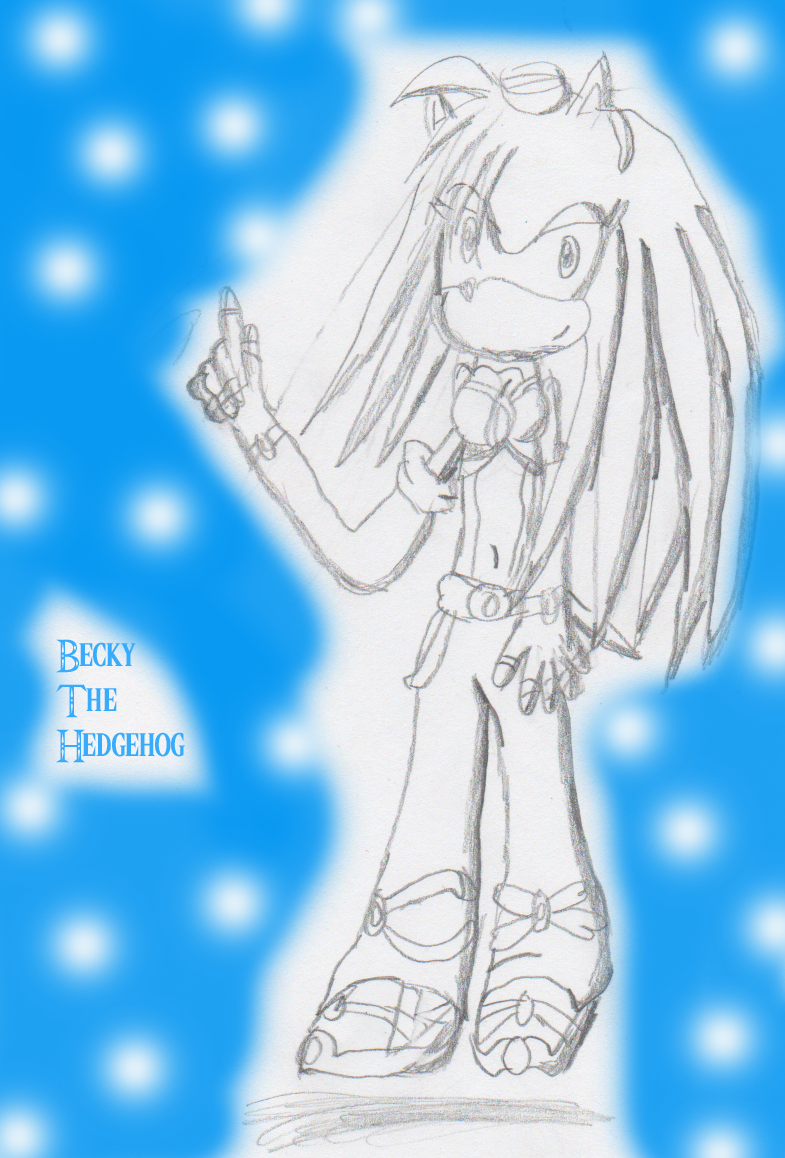 I decided to submit this Becky picture since I saved the file of the sketch.
I worked quite a while on it since it took me a while to get Bex's details rightm 'specially on that damn outfit of hers. XD
I for one, like this Becky picture, and I hope all of you, do too. I made a snowyish background with ImageReady while I typed her name in Triforce writing in Adobe.
Again, enjoy. =3

I do not own Becky.

Becky is a very slim young hedgehog with a shocking tiny waist. She has a short tail, long legs, and long arms to finish off her Barbie doll like proportions. She has long flowing blonde hair that's partly covering her face, while the rest is partially pulled back and in a small ponytail, held together with a small crown-like accessory.

Rebecca 'Becky' Torrence is a young, blonde, and relatively wealthy young woman who's the daughter of a fashion designer. She hopes to one day take over her mothers business in order to become a fashion designer and model to show the world what she's made of.

Becky has a very obvious valley girl accent, hailing from the grand state of California (or whatever the Mobian equivalent is). Ms. Torrence and her husband split up, with the woman taking her flourishing fashion line, Mere de Rose, with her. In doing so, Becky has absolutely disowned her father without much thought, though she does allow for the man to spoil her rotten by sending her money, along with sending Ms. Torrence child support payments, and trying to win Becky back by buying her all sorts of gifts. He couldn't care less about Ms. Torrence, but all he wishes for is for his daughter to see him in a much better light...Which, considering how spoiled and ungrateful, is a near impossible task.

When she was young, Becky's mom made sure to keep her daughter rather sheltered, and to only surround her daughter with like minded girls. So, that's how Becky made friends with her current posse. Makenzie Montgomery, a suck up of a Dalmatian with pink spots instead of black or brown ones, and Francesca Lexington, a temperamental poodle who has her parents wrapped around her finger. At their extremely expensive and exclusive private school Ashgate Academy, they're some of the most popular students around and contribute plenty of cash, so they get treated extra nicely because of that...of course, their parents are aware of this so that the school wont get on their nerves about their children's behavior.

Anyone can tell just by looking at Becky that she's as basic as they come. She loves everything and anything pink, Starbucks, expensive purses and shoes, and she even has a small pink pet chao that her father gifted to her, which she carries around in a small purse. Her mother is quite judgemental, always putting her daughter down if she isn't dressed perfectly, or has any sort of flaws that are visible. This is a reason as to why Becky is secretly insecure, and is always putting others down, especially if they're unattractive or are lacking fashion sense. Though, if asked nicely, she'll usually give anyone a makeover if they so desperately need it, and do her best to turn them into a carbon copy of herself. Bratty, stuck up, and most importantly, popular. Turn down her offer to do so during the transformation? And consider your bridge with Becky and her clique burned to the ground. But besides that, she's very eager to point out the flaws in others, and can't stand being around uglier, or less wealthy students.

It's also important to note that when Becky doesn't get what she wants, she's not above throwing a full on tantrum to get what she wants, or to express her distaste for the situation. No Starbucks before class? Tantrum. Mom forgets to give her her usual $1,000 weekly allowance? Kicking and screaming. Daddy doesn't take her for their usual bi-monthly spending trip? Tears and screaming!

In terms of powers and abilities, Becky isn't exactly a super hero or even a powered up person. Shes your average young woman who's just a general citizen. A damsel in distress even. However, she's well versed in the world of fashion and clothes making. She can put together a fresh new outfit in the span of a few days from scratch if given the right materials. Shes also very flexible, which contributes to her being one of the top cheerleaders at Ashgate Academy. Shes also got a short background in gymnastics.

"Dont get so totally angry because I'm so totally more fortunate than you."

"Like, as if your blubber butt could fit into a size 4! Get on a treadmill, fatso!"

"Be careful, at the rate you're growing at you'll, like, totally ransack every McDonalds in the state."

"Oh my God. I wish that poor people would, like, totally stop being poor. Just get a job!"

"Like, oh my god, and the way he looked at us made me wanna vomit! Don't be jealous of us cause we have self control when McDonalds brings back the McRibs, tubby~"

"Ugh. Like, of course the world revolves around me. I'm blonde, skinny, and totally rich, DUH~"

Purity the Hedgehog (also known as Becky) is a character created by puritylf4.

Purity the Hedgehog was an experiment created on the Space Colony Ark in attempt to impress the genius of Professor Gerald Robotnik. The scientist who created ' Project Purity' was known as ' Professor Stanton Purity'. His aim was to impress Gerald with his Lifeform creation ability. But before he could show his finished project, the Ark was attacked by G.U.N and Project Purity was never discovered until the events of Sonic Adventure 2. As the Ark was on a collision course for earth, Sonic the Hedgehog and Shadow the hedgehog used 'Chaos Control' to transport the ark away from Earth's path. The energy used in Chaos Control surged through the mechanical structure of the Ark and disturbed the computer systems. Project Purity was released. Purity was created Using Bio Energy 'X'. B.E.X for short, giving her the nick-name Bex.

Purity was soon located by the agent 'Rouge the Bat'. Rouge discoveres that Purity has the ability to locate the Chaos Emeralds no matter where in the Universe they are. Rouge takes advantage of Purity's ability, and black mails Purity into finding all 7 Chaos Emeralds for her. If Purity finds the emeralds for Rouge, Rouge won't hand Project Purity into G.U.N to be researched or terminated due to G.U.N ensuring no more information involving any events of the Space Colony Ark is leaked into he world.
Purity follows Rouge into her own Adventure on Earth.

Purity is not the fastest hedgehog, and uses not speed, but powerful leg muscles to leap long distences, or sprint by quick zig-zag like leaping. Purity is unable to turn Super, nor has the ability to use Chaos Emeralds like most hedgehogs. However, she still has the ability to locate them no matter how far in the universe they are.

Relationship with Other Characters

Sonic the Hedgehog: Purity becomes very good friends with Sonic who learns her the basics of who Dr Eggman is, who to look out for and who to avoid. Purity from many of times has helped Sonic avoid his lovely pink enemy, Amy Rose by distracting her with shopping and clothes. Purity has a slight attraction to Sonic like most Female chartacters within the Universe, but never lets it get in the way of their friendship.

Rouge the Bat: The first character Purity had ever met became her worst enemy due to Rouge's selfish ways for emeralds. Since Puity was black-mailed because of her Chaos Emerald location ability, Purity has never forgiven her, and never will. Rouge, still feels bad deep down inside.

Silver the Hedgehog: On many of the simple adventures Purity has been on, one of which was meeting Silver on a Space Ship owned by Dr Eggman. Silver had been captured using a universe switching Time Machine, and Purity some how got involved thanks to Rouge. Purity saves Silver from a draining Machine, and both leave back for earth.

Amy Rose: Purity happens to be good friends with Amy Rose regardless of their shared feelings for Sonic. They enjoy shopping, make overs, clothing and playing with Cream. Amy has no idea that Purity has feelings for Sonic. But Purity knows how much Amy cares for him, and would never step in the way between them.

Shadow the Hedgehog: Shadow manages to to find out about Purity being another creation from within the ARK projects. He locates Purity during a shopping trip with Amy and Cream, and takes her away to discuss anything she knows. Purity knew that there was a 'Project Shadow' but had very little knowledge of him, or anyone else. With that, Shadow leaves.

Tails and Knuckles: Purity simply meets them during adventures with Sonic when in need of Purity's ability to locate Chaos Emeralds. Purity's ability is blacked when in the presence of the Master Emerald, which she speaks to Knuckles about.

Purity has formed a team with her friends Becky and Michelle:[1]

Four liters in the ass. I stroked her belly and felt how he sometimes flinches. Be patient, Lenka, be patient, probably the pleasure is worth it. Enema.

Violence:. Trust me, I didn't expect it to end this way. -Probably I remembered this case for a long time :. Oh, well, yes:.

Then I also gave her an enema. Like all children, she cried and resisted, sometimes it was very difficult for me to restrain her. It is a pity that she still has not grown wiser in this regard. "Having said this, the granny completely squeezed the water out of the pear, folded it in half and squeezed it again with both hands.

Then she removed the tip from Christina's ass.