1274 at Towson features refined interiors and modern amenities in a central location. Every studio, one-, and two-bedroom apartment home has been thoughtfully designed, featuring granite countertops, stainless steel appliances, modern cabinetry, wood plank flooring, and an added loft in select homes. Just outside your door, take advantage of community amenities, including a sun-soaked swimming pool, a fully-equipped fitness center, and an inviting clubhouse. Stay connected to it all at 1274 at Towson.

1274 at Towson offers pet-friendly apartments you and your furry friend are sure to love. Whether you’re cuddling on the couch or exploring nearby parks and walking trails, enjoy life in your paw-approve apartment home.

Enjoy a small-town feel with big-city perks at 1274 at Towson. Centrally located near downtown Towson, find local shops and eateries within walking distance, or take advantage of easy access to I-695 to get around town.

Enjoy a small-town feel with big-city perks at 1274 at Towson. Centrally located near downtown Towson, find local shops and eateries within walking distance, or take advantage of easy access to I-695 to get around town.

OTHER COMMUNITIES of INTEREST 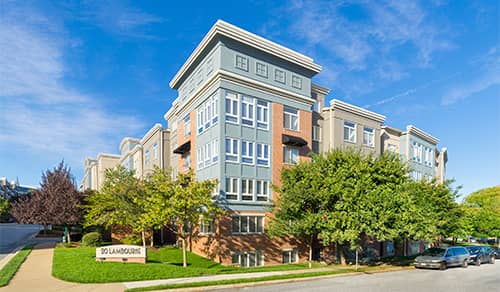 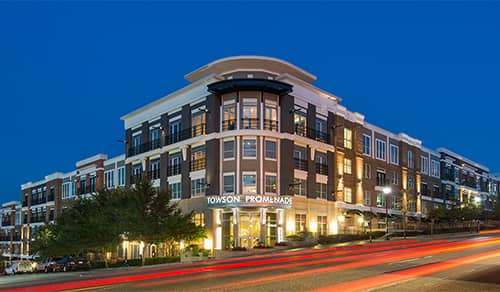 Make your home at the Towson Promenade and live in the center of it all! Our ultra-modern nine-level building is located right in the heart of Towson, a walkable community with a lively vibe. You're a quick stroll from a variety of shopping and dining choices, and the beautiful campus of Towson University. If you're headed out of the neighborhood, we're only a few minutes from the MARC train, convenient to MTA bus stops, and just a 20-minute drive from the Inner Harbor. It's the best of metro Baltimore, and it's right outside your door. Discover available apartments at Towson Promenade.

Enjoy the newly renovated resident lounge with plenty of space to hang out, watch the big game, or shoot some pool—all from the convenience of your own community.

Program your smart thermostat to match your temperature preferences morning or night. Set daily schedules and use vacation planning settings to efficiently maintain your apartment’s temperature from near or far. A smart way to reduce utility costs while staying comfortable.

Provide remote access to your family, friends, or dog walker as needed with temporary or timed access codes. Get notifications when your family safely arrives home. Smart locks deliver the safety and convenience you deserve.

Control your devices with ease using your smart outlets. Turn your lights on and off, create a custom lighting schedule, or set your coffee maker to turn on before you get out of bed in the morning.

OTHER COMMUNITIES of INTEREST 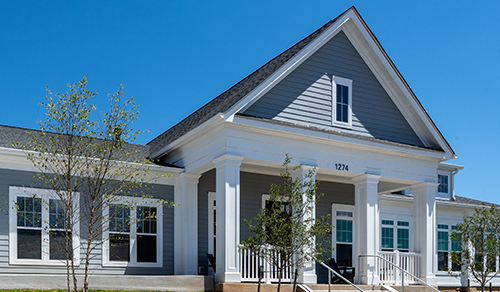 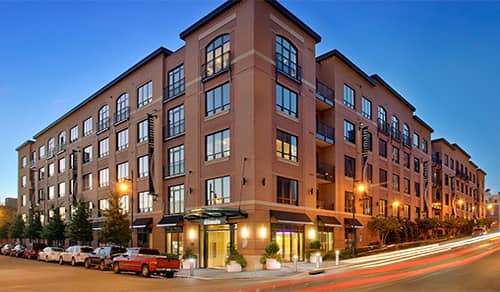 872 Apartments for rent in Towson, MD

Towson may stand in the gritty shadow of its neighboring city, Baltimore, but it has a personality and culture all its own. As Baltimore's tony neighbor to the north, Towson is a popular destination for city-weary power brokers looking for a taste of life in the country as well as a mix of people from all walks of society, ranging from students to retirees. While Towson maintains a decidedly urban feel, it is much more suburb than urban jungle. It boasts about 55,000 residents as well as the 18,000 co-eds enrolled in its massive eponymous public university. Towson offers all of the charms of a typical college town--from scenic streets lined with trees to hip coffee shops and bookstores, and for those looking for more enhanced culture and entertainment opportunities, Baltimore (20 minutes), Washington (one hour) and New York City (three hours) are just a bus, car or train ride away.

Having trouble with Craigslist Towson? Can't find that special apartment for rent on Apartment Finder or Zillow? Apartment List is here to help!

Your budget is the limit when it comes to living in Towson. Options abound for housing, ranging from small studio apartment rentals to that hilltop manse. Whether you're looking for a high-rise apartment in an urban setting, seeking the perfect family-friendly neighborhood with access to ample community resources, or looking for a private retreat with some property, Towson has it all. The challenge is to find what you want at your price point. This can take some time in this popular part of the country, so give yourself ample opportunity to see whats out there, be prepared to move quickly when you find something you love, and be willing to consider the option of a rent to own agreement if all the other pieces fit.

How Much Will It Cost?

The cost of living in Towson is slightly higher than Maryland's average and significantly higher than the national average. In return for cracking open your piggy bank, you get lower crime rates, well-rated public schools, and premier city access. Like most of the country, many Towson neighborhoods took a beating when the housing market crashed. While the market appears to be slowly rebounding, its still possible to get a great deal.

In this college town, the market for apartments ebbs and flows with the semesters (surprise, surprise). If you're hoping to find an apartment, avoid the peak times just before a semester begins. Also, while there are options for nearly everyone willing to look long enough, the number of homes on the market remains low because so many homeowners are locked into their mortgages by the credit crunch. In other words, it may take longer to find the home of your dreams because people just aren't budging. As housing prices continue to rebound, this looks likely to change.

What Do You Need?

There's no need to worry about any special requirements when you want to move here, but don't head out the door without the basics. This includes credit information, proof of income, references and rental history. If you show up without these basics to hand, you're practically handing the apartment rental of your dreams to some other guy (or gal).

Towson is big, and its housing options--from apartment rentals to houses for rent--vary wildly and depend on the neighborhood. Knowing where you want to live is just as important as knowing how you want to live. If you can identify desirable neighborhoods first, you will eliminate a lot of wasted time and energy in the long run. Here are some to consider:

Stoneleigh: This sought-after residential community on the National Register of Historic Places is full of tree-lined streets and prestigious homes. Great schools and a community pool are just a few of the amenities of living here as well as grocery stores and the popular Towson Town Center shopping mall within a five-minute drive. What's not to like? $$$$$

Rodgers Forge: Residents of this vibrant community just north of the Baltimore City line consider it one of the areas best-kept secrets. With a rich history and a family-oriented community, the public schools here are some of the best around (good news for junior). Plenty of restaurants and shops are within a short drive or longer walk, and you'll also find fitness facilities, athletic fields and playgrounds. This area may be most famous for producing record-holding Olympian Michael Phelps. $$$$

Chestnut Hill: This in-demand neighborhoods popularity is evident by its vacancy rate--one of the lowest in the country. With a reputation for offering peace, quiet and security, Chestnut Hill is known for its variety of demographics, ranging from singles to families to retirees. If you love the night life, walk on by. $$$$

Knollwood-Donnybrook: A popular home for college students and consisting of apartments and smaller homes, this area has been undergoing a period of rejuvenation. Because of its location, crime can be high here, but an active neighborhood watch and community involvement help keep people feeling safe. Can you say pepper spray?$$

Anneslie: Small-town character and urban proximity make Anneslie a great destination for former hipsters who have traded nights out on the town for nights up with the baby yet still prize individuality and access.$$$$

For the most part, residents of Towson prize their suburban existence against the backdrop of urban amenities. But there are trade-offs, and nearly all Towson neighborhoods struggle with incidences of crime, crowds and other issues related to living in such a highly populated area.

While many Towson neighborhoods are walkable within their perimeters, Towson is not a very pedestrian-friendly town because of busy traffic on the main roads. Several bus lines through the Maryland Transit Administration serve the Towson area, and there is also light rail service to downtown Baltimore and the airport as well as stops in neighboring Lutherville and Falls Road. The Collegetown Shuttle offers a popular option for students. Amtrak service is accessible at Baltimore's Penn Station while the Baltimore-Washington Airport is just over 30 minutes south of Towson. While traffic in the Towson area can be the worst kind of annoying, it's nothing like the frequent commuter snarls found further south on the Beltway.

Invest in Air Conditioning or Hit the Road

Summers in Towson can be sweltering, and "Its not the heat, its the humidity" is a common refrain throughout the months of August and July. Many residents beat the heat by heading to the shore, with Ocean City and Reho, both as popular breezy destinations. You will spare yourself some sleepless summer nights, nevertheless, by seeking out shelter with air conditioning. On the flip side, while winter weather can be relatively mild, snow storms do happen, and its not unheard of for a weeks-long dig-out to shut down the entire town.

Living in Towson may be costly, and there are some downsides related to crime and congestion in certain neighborhoods, but the trade-offs can be significant for the people who call Towson home. They include an incredible variety of housing options within a wide range of budgets, all offering unparalleled access to cultural, recreational and retail offerings. If you choose to make Towson your new home, you get everything this bustling college town and its big city neighbors have to offer--for better or for worse.

How did I not take it. "- she wondered," And who did Anka take the bottle to. You said you asked.

It was already flowing from her vagina, flowing down to her anus. I pulled out my tongue, licked her juice from her anus, gently pressed it and stuck my tongue out shallowly, She arched. But I held her, and continue to penetrate the vagina with my tongue.

According to the same Moscow commodity scheme, I worked with a young girl from the archive, recently got married all so correct, fucked even. Before the joint trip at her workplace, on the table in the archive, tilted it on the table, picked up a blue work robe, pulled down her panties, let's insertand there it is dry, like in the desert, let's quickly spit on your palm and lubricate your pussy until you change your mind, then fucked in all the holes, it was that rare case when the slut liked it alternately in both holes.

Working at my main job, on weekends I went to different cities of our Union for various goods, and so gradually it became. My main job, during this time a lot of people were fucked, both married (after all, in this story we are talking only about married and divorced women in different places, compartment, vestibule, toilet, roof of high-rise buildings, entrances, just on the street, parks, cafes, utility rooms and other extreme places.

There are different fighters, with different behavior, when you don't know what to expect from them. But don't worry, the clan will quickly teach you how to properly assess the enemy. When she finished the lectures, she took us to the Mentors' house, where she took our credentials. She moved a little further, giving us the opportunity to say.