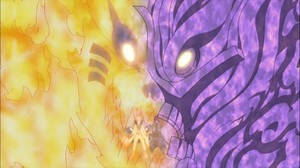 Last week, Naruto Shippūden devoted an entire episode to pumping up the crowd for the next wave of the fight. This week, episode 383 starts off almost the same. Even despite improved animation—some drawings seem a little off model and shots still linger for too long on stills, but there's more movement overall—this first half is an unimportant rehash for the most part. While Naruto and Sasuke get a few attacks in, the rest of the crowd continues to share memories through telepathy.

The episode attempts some tension as Shikamaru, gaunt and unconscious, seems dangerously close to death. Still, rule one of Naruto Shippūden is that primary and even secondary characters are rarely in danger of dying for good. It happens—and it's a shock when it does—but because resurrections and close calls occur at a much higher rate, it's hard to get emotionally worked up when a character is at death's door. Sure enough, his fate is no surprise. However, as Shikamaru is one of the more compelling characters, with a genius intellect for strategy always at odds with his laziness, the show probably made the right choice here.

The second half of episode 383 picks up where the episode should have started: the next wave of the battle. The Kage fan out to lead the background ninja into a frontal assault against the Divine Tree while Naruto and Sasuke tackle Obito. (Madara is strangely absent, but perhaps he's just content to watch things unfold.)

The series dips a little too much into deus-ex-machina territory as Tsunade and Sakura combine powers to turn slug Katsuyu into an all-purpose healing slime. (Why on earth didn't they do this earlier? Perhaps the excuse is Tsunade just got there. Still, they could have used that in earlier battles.) This frees them both up to join the battle instead of running around healing everyone. (I always found it strange that two of the most powerful ninja in terms of physical strength are more occupied with healing on the field. Can't someone who doesn't know the "I can punch holes in mountains" technique show an interest in healing?)

Despite a little action, the episode slows down again toward the end as Obito and Naruto face off before the next round. Obito despairs about the hopelessness of friendship and the transient nature of the world, and ever-optimistic Naruto thinks friendship is the bee's knees and he's raring to save the world, but they're both broken records. This isn't unique to Naruto Shippūden—a lot of shōnen protagonists and villains grandstand in the same manner—but it does become grating in repeated doses.

Episode 383 is an example of how close the show can come to balancing things right without quite pulling off anything impressive. Some episodes should highlight other characters besides Naruto. However, with so many secondary and background characters present, the show doesn't have time to showcase everyone in depth. When this episode attempts it, those characters are mostly just thinking about how great Naruto is. We know he's great. Let's see what you guys can do to help out. The only exception to this is Orochimaru. Seeing him join the battle for his own self-serving reasons is immensely satisfying.

If the series is going to drag out this final fight—I almost laughed when Obito said the Divine Tree would destroy the world "in a few minutes"—then focus on small groups within the big battles. Let's see the techniques that define the secondary characters as individuals one more time before the curtain falls.

Amy is a YA fantasy author who has loved anime for nearly two decades.

Naruto Shippuden 383 shows the power of Naruto’s Ninja Way allowing him to overcome any obstacle Obito places on him. It also allows Naruto to unconsciously heal Shikamaru to his full potential when Tsunade also arrives to help. Everyone gets happy and go on to battle with their hearts out!

Naruto Shippuden 383 begins as Hashirama asks every other Kage to join with him and be respectful as well as affiliate with him. We also see the current Kage’s back and will want to get into gear to battle. Everyone gets ready and are going to battle against Obito and his power. Both Sasuke and Naruto fight against Obito, pushing him back but unable to do any real damage.

We see Shikamaru get covered with Naruto’s chakra as his will seems to want to protect everyone, he seems to be doing so without unconsciously. We see Shikamaru mentions that Naruto never changes, he’s always helping. He goes on to think about what happened in the past when he never talked to him.

He even says sorry to his dad since he’s there now to help Naruto, he doesn’t have someone that could help him, thus he will need to take position and thus he will fight by his side, from this he gets up. Tsunade quickly arrives and gives him a ton of chakra allowing him to quickly recover.

Everyone begins to become happy that he’s back, they all get rallied up into becoming greater. Naruto and Sasuke keep on fighting. Everyone mentions that it’s time to fight against the tree as everyone gets ready. Raikage also thinks about when he begged him not to kill Sasuke.

Everyone gets pumped up and quickly go on ahead to battle. Gaara also thinks about their past and gets everyone excited to fight. Kakashi is also getting ready to battle, Guy also gets ready. Everyone gets up and ready, they keep on pushing and cutting more and more wood from he trees.

Tobirama uses the connection between Kurama and Minato to avoid anyone else getting sucked using the connection between Kurama and it’s chakra. Orochimaru also helps out Hiruzen in battle. Obito goes on the offensive next up to capture both Naruto and Sasuke and smashing them all in the ground even after Sakura and Tsunade use their healing jutsu.

We learn from Kakashi that Obito is looking for some kind of answer that he thinks he will find within Naruto. He smashes them into the ground and asks why Naruto still stands up, after all that has happened, how can they  keep on going.

Naruto goes on to say that it is because of his Ninja way that he believe will drive him to do what he believe is the correct thing. Naruto and Sasuke both get ready and join their Susanoo and Kurama mode into one. It’s even more powerful than before. They can now fight in sync! Naruto Shippuden 383 ends here.

A fantastic episode with lots of amazing action, Naruto and Sasuke are finally working together and it’s nice to see this because next week’s Naruto Shippuden 384, titled “A Heart Filled with Comrades”, we’ll see Naruto and Sasuke battle, with Naruto talking to Obito trying to convince him.

Episode 383: "Pursuing Hope"
"Saki o Ou" (希望を追う)
Shikamaru nearly dying was fabulous, because he understood that he musn't die yet because he must be Naruto's future advisor. And he's right, there isn't a better Hokage advisor than him.
Naruto said that he will not let his comrades die. Neji died some time ago. One more casualty will bring Naruto down.
Thanks for Tsunade, she healed Shikamaru. Yosh!!! I never wanted to see Shikamaru dead because he is very important, very intelligent. Without his decision more shinobi would have died.
Even if Orochimaru has no interest in this war, Obito could make his experiments no longer be if he doesn't take action. Snakes, arise!
I expect to see Kakashi finally out of his dimension in the episode. He recovered. He was Obito's best friend, he needs to do something to change Obito. Obito's nihilism and pessimism has affected him too much. In the past he was just like Naruto, he wanted to become Hokage and surpass everyone. That was his 忍道. Now, he gave up that dream.
Naruto, unlike him doesn't give up his dream, that's his Nindō!
"I'm not gonna run away and I never go back on my word, that is my nindō! My ninja way" (Naruto Uzumaki)
Kakashi is right. When you see a comrade down you tend to help him because you care about him and that makes you stronger.
Obito is trying to confirm his ideas through Naruto. At least he's right on one thing. He was just like Naruto. Probably Obito gave up his dreams because he lost Rin and the Curse of Hatred took control over his emotions. This happens only to Uchiha.
As was revealed by the Second Hokage, Tobirama Senju, the Uchiha are people greatly devoted to love and friendship. Because the Uchiha tend to conceal their more affectionate traits, a member's love can be transformed into hatred in the blink of an eye if they start to feel greatly ill-treated or somehow lose those closest to them. The despair of the experience causes a manifestation of unique chakra within that Uchiha's brain, impacting the optic nerves and creating the Sharingan. Furthermore, advanced forms of the Sharingan require extremely painful experiences that cause the user to delve into darkness that utterly consumes them. This causes the Uchiha to do anything and everything in their power to achieve their goals and show their own superiority, regardless of the consequences and repercussions of their actions, starting a war and/or bringing about their own deaths being two prominent examples. An Uchiha who falls victim to the curse can give up that hatred if someone close to them can reach them, though this is incredibly difficult as the Uchiha becomes largely unreasonable and unflinching in their singular desire.
GREAT EPISODE! RATE: 10/10!

Plot Summary: It has been two and a half years since Naruto Uzumaki left Konohagakure, the Hidden Leaf Village, for intense training following events which fueled his desire to be stronger. Now Akatsuki, the mysterious organization of elite rogue ninja, is closing in on their grand plan which may threaten the safety of the entire shinobi world. Although Naruto is older and sinister events loom on the horizon, he has changed little in personality—still rambunctious and childish—though he is now far more confident and possesses an even greater determination to protect his friends and home. Come whatever may, Naruto will carry on with the fight for what is important to him, even at the expense of his own body, in the continuation of the saga about the boy who wishes to become Hokage.

He went out in a towel. I sat down on the sofa next to him. He only had one towel on. I poured vodka, we clinked glasses and drank. The conversation did not go well on the TV, there was some kind of mura.

Mom pressed her to the sofa with force. hold on, shameless!, I grabbed my sister's ankles with force. This time my mother charged soapy water and the torture continued. In three doses, my mother poured in a liter and a half of water, and even pumped it in. Even from the side it could be seen how much the Xanin's stomach was swollen.

I tried to relax. and felt like his fat prick proh. - AAAAAAAAA !!. OOOOOOOO !!.

Turn that off meme