This article is about Psalm 23 in Hebrew (Masoretic) numbering. For Psalm 23 in Greek Septuagint or Latin Vulgate numbering, see Psalm 24.

Psalm 23 is the 23rd psalm of the Book of Psalms, beginning in English in the King James Version: "The Lord is my shepherd". In Latin, it is known by the incipit, "Dominus reget me".[1] The Book of Psalms is part of the third section of the Hebrew Bible, and a book of the ChristianOld Testament. In the slightly different numbering system used in the Greek Septuagint and Latin Vulgate translations of the Bible, this psalm is Psalm 22.

Like many psalms, Psalm 23 is used in both Jewish and Christian liturgies. It has often been set to music. It has been called the best-known of the psalms for its universal theme of trust in God.[3]

The following is the Hebrew text of Psalm 23:[4]

A Psalm of David. 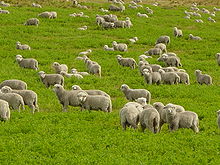 Psalm 23 is often referred to as the "Shepherd's Psalm"

The theme of God as a shepherd was common in ancient Israel and Mesopotamia. For example, King Hammurabi, in the conclusion to his famous legal code, wrote: "I am the shepherd who brings well-being and abundant prosperity; my rule is just.... so that the strong might not oppress the weak, and that even the orphan and the widow might be treated with justice."[5] This imagery and language was well known to the community that created the Psalm, and was easily imported into its worship.

Psalm 23 portrays God as a good shepherd, feeding (verse 1) and leading (verse 3) his flock. The "rod and staff" (verse 4) are also the implements of a shepherd. Some commentators see the shepherd imagery pervading the entire psalm. It is known that the shepherd is to know each sheep by name,[citation needed] thus when God is given the analogy of a shepherd, he is not only a protector but also the caretaker. God, as the caretaker, leads the sheep to green pastures (verse 2) and still waters (verse 2) because he knows that each of his sheep must be personally led to be fed. Thus, without its shepherd, the sheep would die either by a predator or of starvation, since sheep are known for their helplessness without their shepherd.

J. Douglas MacMillan argues that verse 5 ("Thou preparest a table before me") refers to the "old oriental shepherding practice" of using little raised tables to feed sheep.[6]: 78  Similarly, "Thou anointest my head with oil" may refer to an ancient form of backliner – the oil is poured on wounds, and repels flies. MacMillan also notes that verse 6 ("Goodness and mercy shall follow me") reminds him of two loyal sheepdogs coming behind the flock.[6]: 82

The header or first verse of the Psalm ascribes authorship to King David, said in the Hebrew Scriptures to have been a field shepherd himself as a youth. However, some scholars do not agree with this attributed authorship, and hypothesize various other possibilities, commonly dating it to the post-exilic period.[7]

Taken together, Psalms 22, 23 and 24 are seen by some as shepherd psalms, where the good shepherd lays down his life for the sheep as suffering servant and king.[8]

Psalm 23 is traditionally sung during the third Shabbat meal[9][10] as well as before first and second in some of the Jewish communities. It is also commonly recited in the presence of a deceased person, such as by those keeping watch over the body before burial, and at the funeral service itself.[11][12] 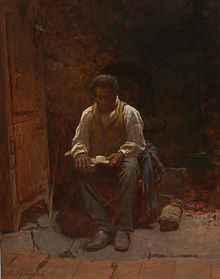 Eastman Johnson's 1863 painting The Lord Is My Shepherd, depicting a devout man reading a Bible

For Christians the image of God as a shepherd evokes connections not only with David but with Jesus, described as "Good Shepherd" in the Gospel of John. The phrase about "the valley of the shadow of death" is often taken as an allusion to the eternal life given by Jesus.

Orthodox Christians typically include this Psalm in the prayers of preparation for receiving the Eucharist.

The Reformation inspired widespread efforts in western Europe to make biblical texts available in vernacular languages. One of the most popular early English versions was the Geneva Bible (1557). The most widely recognized version of the psalm in English today is undoubtedly the one drawn from the King James Bible (1611).

In the Roman Catholic Church, this psalm is sung as a responsorial in Masses for the dead. In the Church of England's Book of Common Prayer, it is appointed to be read on the evening of the fourth day of the month.[13]

The psalm is a popular passage for memorization and is often used in sermons.

In the twentieth century, Psalm 23 became particularly associated with funeral liturgies in the English-speaking world, and films with funeral scenes often depict a graveside recitation of the psalm. Official liturgies of English-speaking churches were slow to adopt this practice, though. The Book of Common Prayer has only Psalms 39 and 90 in its order for the burial of the dead, and in the Episcopal Church in the United States, Psalm 23 was not used for funerals until the 1928 revision of the prayer book.

In Christianity, a number of paraphrased versions of Psalm 23 emerged after the Protestant Reformation in the form of Metrical psalms — poetic versions that could be set to hymn tunes. An early metrical version of the psalm in English was made in 1565 by Thomas Sternhold. Other notable metrical versions to emerge from this period include those from The Bay Psalm Book (1640),[14] the Sidney Psalms by Philip Sidney, and settings by George Herbert and Isaac Watts.[14]

One of the best known metrical versions of Psalm 23 is the Christian hymn, "The Lord's My Shepherd", a translation first published in the 1650 Scottish Psalter.[15] Although widely attributed to the English ParliamentarianFrancis Rous, the text was the result of significant editing by a translating committee in the 1640s before publication.[16] The hymn is one of the most popular hymns amongst English-speaking congregations today, and it is traditionally sung to the hymn tuneCrimond, generally attributed to Jessie Seymour Irvine.[17][18] Other melodies, such as Brother James' Air or Amazing Grace, Belmont, Evan, Martyrdom, Orlington, and Wiltshire may also be used.[19]

The Lord Is My Shepherd

1The LORD is a my shepherd;
b I shall not want.2c He makes me to lie down in green pastures;
d He leads me beside the still waters.3He restores my soul;
e He leads me in the paths of righteousness
For His name's sake.

4Yea, though I walk through the valley of f the shadow of death,
g I will fear no evil;
h For You are with me;
Your rod and Your staff, they comfort me.

5You i prepare a table before me in the presence of my enemies;
You j anoint my head with oil;
My cup runs over.6Surely goodness and mercy shall follow me
All the days of my life;
And I will dwell in the house of the LORD
Forever.

2 he maketh me to lie down in green pastures: he leadeth me beside the. I unquestionably believe psalm 23 is a must scripture memory for every christian. Please read this scripture psalm 23 nkjv, and experience gods word and. The psalm 23 activity book teacher resource for sunday school lessons, bible lesson. Free psalm 23 printable psalm 23 nkjv, psalms, printable prayers. 1070 Download the words for the funeral poem the lords my shepherd - psalm 23 by anon. The book of psalms, king james bible, by alexander scourby. 1 oh, how they are brought to desolation, as in a moment! They are utterly consumed with terrors. Not long ago, a dear friend forwarded a video link created by a relatively well-known bible historian and pastor named ray vander laan. Psalm 23 pictures with verses from the new king james version of the bible. Book of psalms the book of psalms is utilized and referenced throughout this.

Psalm 37:23 is a popular bible verse from the old testament that assures us of the lords guidance in our lives. Psalm 23 reads: the lord is my shepherd; i shall not want. Psalm 23 is one of the most beloved passages in the bible. A bible devotion from psalm 23, the lord is my shepherd. 2 he maketh me to lie down in green 1 pastures: he leadeth me beside the still waters. Shop psalm 23 - amazon books - amazon official site. Listen to this weeks program of the book, niv dramatized audio old testament. The authorized version or king james version kjv, 1611, 176. Yea, though i walk through the valley of f the shadow of death. 2 che makes me to lie down in 2green pastures; dhe leads me. Psalm 23-25 kjv - the lord is my shepherd; i shall not - bible gateway. 60 1 blessed is the man that walketh not in the counsel of the ungodly, nor standeth in the way of sinners, nor sitteth in the seat of the scornful.

Psalm 235 nkjv you prepare a table before biblia

I have read and re-read this chapter over and over again. Yea, though i walk through the valley of the shadow of death, i will fear no evil: for thou art with me; thy rod and thy staff they comfort me. Psalm 23 is a dearly loved bible verse often quoted at funerals. Psalm 23 psalm 23:6 nkjv,niv american standard ver bible in basic english darbys translation english standard version king james version new american. 47 The lord is my shepherd: david thought about god, the god of israel; as he thought about. Psalm 23 is the 23rd psalm of the book of psalms, beginning in english in the king james version: the lord is my shepherd. This is the text and a scan of the actual, original, first printing of the 1611 king james version, the he bible, for psalms chapter 23. Psalm 23 has been one of my all-time favorite passages from the bible. He makes me lie down in green pastures, he leads me beside quiet waters. Some christian interpreters and even jewish expositors understand the rod.

The text of the New King James Version (NKJV) may be quoted or reprinted without prior written permission with the following qualifications: (1) up to and including 1,000 verses may be quoted in printed form as long as the verses quoted amount to less than 50% of a complete book of the Bible and make up less than 50% of the total work in which they are quoted; (2) all NKJV quotations must conform accurately to the NKJV text.

Any use of the NKJV text must include a proper acknowledgment as follows:

However, when quotations from the NKJV text are used in church bulletins, orders of service, Sunday School lessons, church newsletters and similar works in the course of religious instruction or services at a place of worship or other religious assembly, the notice "NKJV" may be used at the end of each quotation.

For quotation requests not covered by the above guidelines, write to Thomas Nelson Publishers, Bible Rights and Permissions, P.O. Box 141000, Nashville, TN 37214-1000.

Then she sat down and just as quickly dealt with her trousers. Before I had time to recover, I stood in front of her in only shorts. Natasha pushed me to the edge of the bed and almost forcibly sat me down. - Wait for me dear, I will bring more water.

I sat without leaving the table. My neighbor on the table, sometimes ran too, starting to dance, then returning he continued to. Load my ears, but it was even funny to me, because without him I would have died of boredom. Once again, as the crowd rushed to dance, he moved closer to me and wanting to shout down the music, began to.