In a big trailie comparison story in the 1990 issue of Motorcyclist, the Yamaha XT600 was described as follows: “After ending up king of the dirt last year, Yamaha’s XT600 turned away from its roots and focused on the street. Electric starting, a swoopy new look and a more accessible seat height make it more attractive to all-surface novitiates who are after a big bore but aren’t up to the height or heft of [other bikes in the comparison].” This example takes the street aspirations one step further with a supermoto conversion.

The “E” in XT600E meant it had an electric starter – there was also a XT600K and I think you can guess what the K stood for. The delineation between E and K started in 1990, when Yamaha gave the model a significant update. Aluminum wheels were replaced with chrome-plated steel, the tachometer was removed, the oil tank was moved, among other things. Basic specifications included 45 horsepower, 35.5 pound-feet of torque, and a top speed of approximately 100 miles per hour. For more on the big XT, check out this review from MCN where they call it a fabulous bike for around town.

This example has just 3,000 miles and it’s said to be “super clean”. Listed modifications include Excel supermoto wheels with Michelin street rubber and LED turn signals – but the seller says “what you see in the pictures is what you get”, and I also see a couple of race stands, aftermarket front disk brake guard, Cycra hand guards, and EVO handlebars. I think this would be an incredibly fun runabout, and I even find the 80s styling charming – but I do think that Yamaha’s paint guys may have taken a little too much inspiration from the Solo Jazz cup design on this livery…

Find this XT Sumo for sale in Columbia, Maryland with bidding up to $3,545 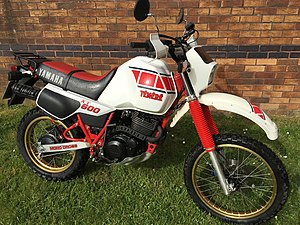 The original 34L version of the XT600Z Ténéré distinguishable by the vertical blocks on the tank.

The XT 600 is considered to be an all-purpose Enduro, which is suitable for use on the road as well as off-road driving. Its disc brakes, four-valve engine, mono-shock absorber (mono Cross) and contemporary 12-volt electrics represented significant improvements over the 1975 model Yamaha XT 500.

The first XT 600 was introduced in June 1983, the XT 600ZL Ténéré [34L] based on the XT 550 engine, kick start only, with the 30-Litre white tank. In 1984 the basic XT 600 was introduced to "replace" the XT 550. In addition to the changes in design, the main difference was an 11.5-litre tank instead of the 30-litre long-range 600ZL Ténéré's tank; the road model Yamaha SRX 600 was derived later. In 1991, the somewhat obsolete XTZ 600 Ténéré was replaced by the water-cooled, five-valve Yamaha XTZ 660, which did not manage to carry over the legendary reputation of its air-cooled predecessors.

Over the years, the XT was built in 600 different variants which, however, usually only look different. The most important change of the XT 600 which had only been using a kick starter was in 1990; the XT 600 E was presented as a new model with a more contemporary design, chrome-plated steel wheel instead of aluminum wheels, now without a tachometer, with the exhaust as the supporting frame member, a 13.9-litre tank and an electric starter. In addition, the oil tank, which was previously located under the left side cover, was moved forward behind the steering head between the frame and girder bridge. Due to high demand, the XT 600 K, which featured a kick-starter, but was otherwise structurally identical to the XT 600 E model, was introduced to the market; the series ran until 1995. Due to more stringent emissions requirements, the power of the XT 600 E, which had become the only available model, was reduced by 4 kW to 29 kW (39 hp), and a tachometer was reintegrated in the cockpit. The clutch actuation on the engine body was moved from the left to the right side, and the muffler was no longer part of the rear frame. The reliability of the XT unit was not harmed, as mileages of over 100,000 km and unopened motor are not uncommon.

Points of interest: The 600ZL was known as this because it was a 600Z 34L. However this trend did not continue with the following 55W model in 1984/5, or it could have been known as 600ZW. The easiest way to distinguish a 34L from the near-identical (but in many small ways superior) 55W is that the latter has sloping speed blocks on the tank.

Polish custom house 86 Gear Motorcycles have taken a time warp back to the early-1980s, transforming a customer’s well-loved 2000-plate Yamaha XT600 into an XT500-aping supermoto.

Used for years as a daily rider, before being handed over to the firm for its extreme makeover, the 'XT630 Supermoto' transformation took around one-and-a-half years, with modifications to the engine, frame, suspension, brakes, looks and more.

Starting with the frame, the original steel tubular set-up has had its subframe modified and shortened, with a shimmering alloy tank sourced from a 1983 XT500 added on top. Moving backwards, there’s also a retro bench seat, plus a minimalist Motogadget speedo and bar-end indicators upfront, in-keeping with the minimalist look.

Underneath the new styling, there’s also YSS rear shocks and Wirth progressive springs in the forks. Stopping power is also improved with a fatter front disc and new front master cylinder. For improved roadholding, the bike also rolls on a fresh set of 17in SM Pro supermoto wheels, shod with Dunlop Mutant rubber.

Adding to this improved cornering prowess is more bite from the 21-year-old 45bhp single-cylinder engine, thanks to a new high compression piston, plus a camshaft taken from a Yamaha TT600 trail bike and more. Other tweaks also include a bespoke air intake, with K&N pod filters, custom exhaust system and a hydraulic clutch.

Read the latest stories causing a buzz this week in News…

And only when she got married and gave birth, she began to recover. And after the second child, she became like this, and the weight itself seems to be holding, Lera said smiling, trying to. Defuse the situation between mother and daughter.

The light barely made its way inside, but it was relatively light So, he stood in front of me and looked down. At me, he was definitely a head taller than me. We started kissing, and I noticed that he treats me quite aggressively and does not stand on ceremony.

As in the past. Beer. Beer and life has become easier. And tomorrow home.