drawing on the run – Tom Barnes

website builders “The last of the great gaucho painters,” he likes to call himself. His watercolor and ink drawing, Sexy Legs and Bootswill be auctioned at Out on a Whim #4 November 3.*
At some point in the near future, he’ll come to Whim W’Him rehearsal to sketch.
I hope to be there! 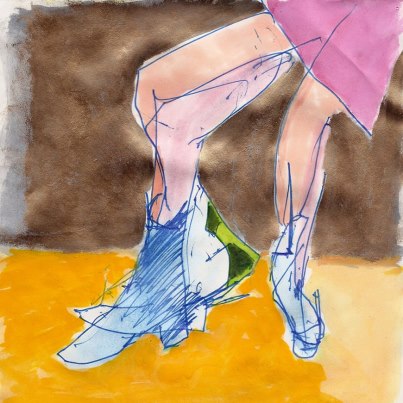 There is an interesting tension in Tom Barnes, between his midwestern, Lutheran background and the free-wheeling, cussin’, hard-drinking lover of night life that I met at Linda’s late Sunday morning. He’s a canny raconteur, an ornery rebel; he’s also has a grizzled charm and a real passion for his work. And he is never one to hold back. Whether telling stories about “back in the day” when he stirred up all kinds of trouble; describing with earnest reverence the influence of his mentor, Richard Caemmerer who introduced him to both the appreciation and practice of art; reminiscing about “my good friend and only muse, Kina“; or reflecting on his art, Tom lives/talks/works with tremendous gusto. His favorite quote is from the late German painter, Sigmar Polke. “There is nothing I can say about my pictures. I paint and that is far from easy, and that is all I can do.” 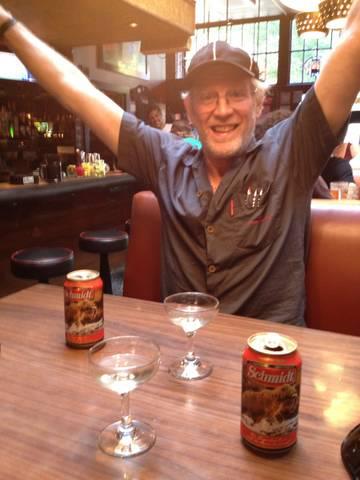 A good while back, Tom also did a lot of traveling, in Latin America, Asia and all around the US. His constant companion was an 8 x 8 inch sketchbook, in which he drew, people mostly. These small watercolors use a brilliant, and to me very appealing, palette. They burst with movement, form and spirited line.

At various other points in his career, Tom attended Banff Center of Fine Arts on scholarship, lived in New York City while working at PS 122, and got a BFA in performing arts, theater and painting from Evergreen College, ranging widely into other styles and media. In the last three years, though, he has returned to this format, which he calls Drawing on the Run. 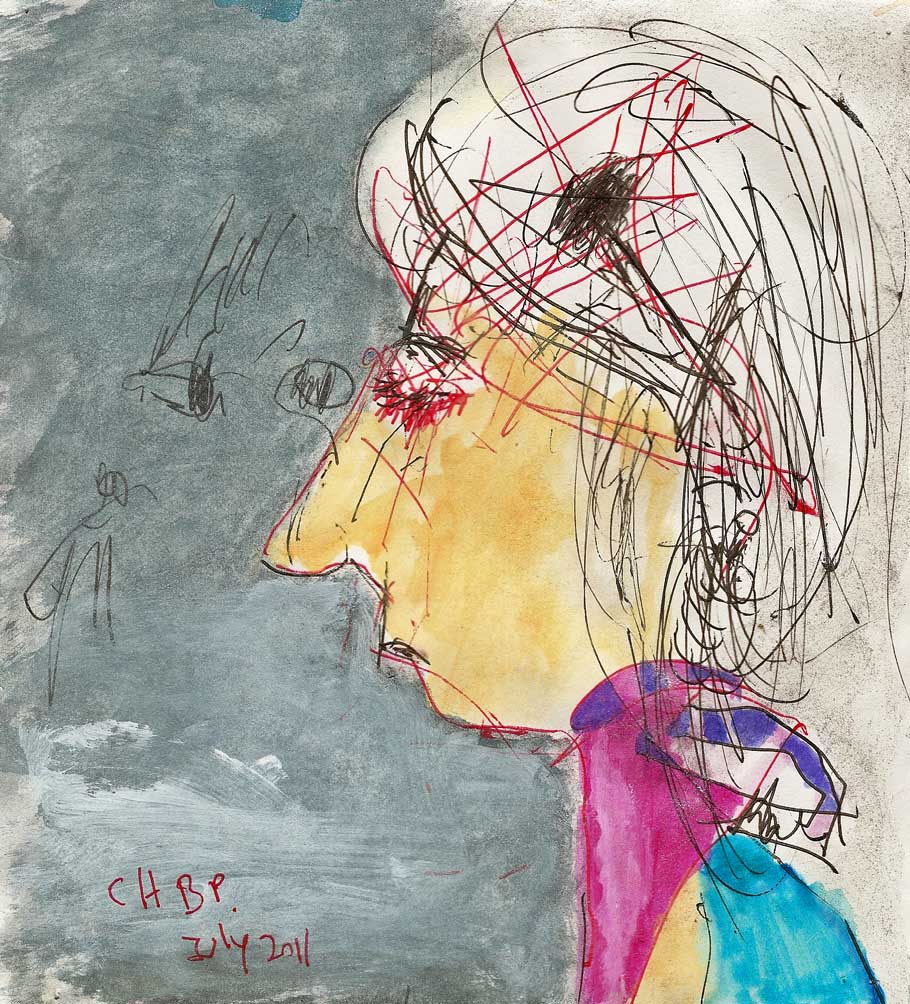 A sketchbook is unobtrusive. Tom sits, in a tavern or coffeeshop, a burlesque show or park and draws with a Uniball pen (black, blue or red). Later he completes his pictures by painting on the sketch with watercolors. The initial drawings “aren’t studies for anything. What they are is what they are—so old fashioned.” He ends up with a kind of collage.
A figure might have one person’s face, another’s body or stance. But he captures life live. “It’s a little bit,” he says, “like being a chronicler.” A troubador in pen and paint. 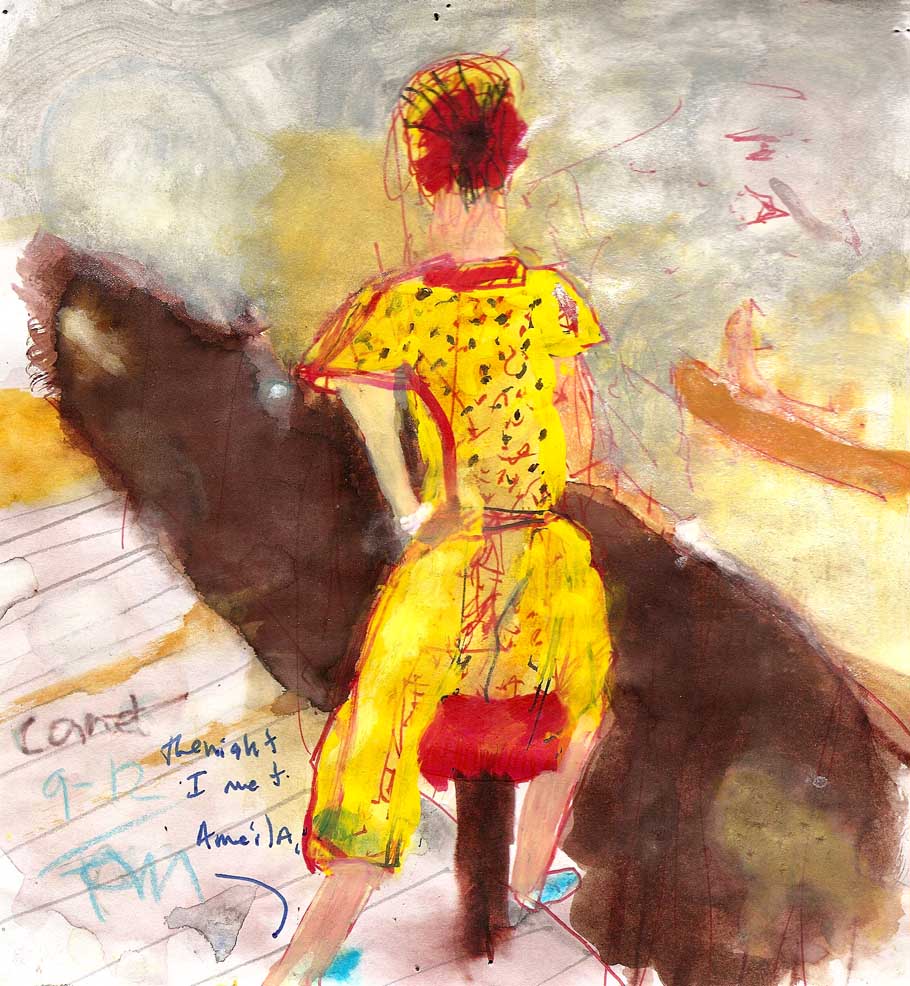 He is amused and intrigued that burlesque, which was something like a dirty word in the feminist Northwest for a long time, is now a hot commodity. Why does it appeal to him? “What I like most is to drink, draw, and look at sexy people,” he says. Also, it’s about fashion he adds, and dance. “I like clothes and love dance. My whole life.” As a customer service rep or in some other capacity, “I’ve been in the theater almost every day.” 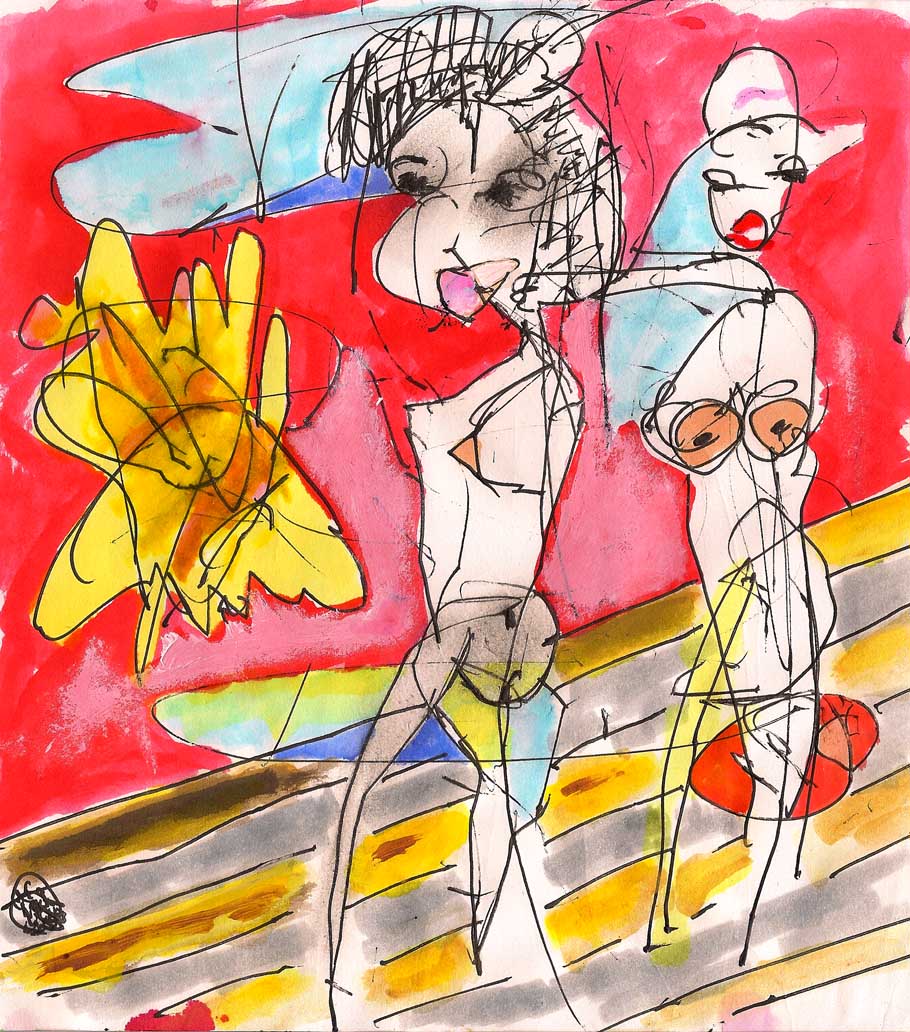 “Although,” as Tom remarks, “I like to think of myself as a free thinker and open minded, when it comes to my work, I have all these rules.”
Never use photos. For him, this “feels like cheating.”
Draw when I’m excited by what I see.Like those of Toulouse Lautrec, Tom’s subjects aren’t to be observed in isolation, but embedded in a context, surrounded by color and light, sound and smell, part of a world. He tries to render what it is that excites him, seeming to go by the opposite rule from “reflection in tranquility.” After the fact, back home, he knows there are things that might be done to make a picture “better.”
But at bottom, what is most important for him is to Stay true to the line.

When two bids are placed for the same amount, the bid placed first based on the timestamp wins. Timestamps are set when the initial bid is placed, for autobids this is when a maximum was set not when the system prompted the bid to win.

Why are there bids with the same amount?

We list competing bids of the same amount to indicate what prompted an autobid to be placed. Otherwise, it would be unclear as to why an autobid was increased.

Born in High Point NC, Tom Barnes grew up in the pine forests and coastal plains of South Georgia. In the early fifties, raised amongst the gators, mosquitoes, and bourbon of South Georgia, Tom was dutifully packed off each summer, traveling by train to Savannah where he spent two weeks with the twins, Lila and Bess… may they rest in peace...

The two sisters insisted on taking the bus downtown everyThursday to shop, dine out, and maybe see a movie. Early in the morning, a lengthy discussion ensued as to what to wear. Completely coordinated in salmons, pinks, baby blues, mint greens, or lemon yellow, the two ladies set out toting bus tokens in their purses, and sporting hats with flowers (always with flowers), gloves, costume jewelry, and pumps matching their outfits. The fragrances exuded were thick with magnolia, lilac, and oleander.
Stores like Adler's, Fine's, and Levy's preceded lunch at Morrison’s, always topped off with steaming hot coffee and coconut custard pie from Anton's. Roaming around the "city of parks," the three often ended up in Telfair Academy, the only art museum Tom ever saw until he was 16.

The combination of femininity expressed by the two grand dames, the heady paintings and statues of the museum, and a gift from God for things artistic, all came together in the "long neck ladies" which have become Barnes' signatures. The attitudes and poses of the subjects express the widest range of feminine emotion. The layers upon layers of brilliant transparent watercolor in gambouge, prussian, sap green, azrilian crimson, ochre and vermillion build to rich luscious color… and the touch of 14K gold gives these decorative art pieces a sparkle that warms the heart and reminds us of an era long gone…may it rest in peace…

In 1990, Tom retired from the corporate business world and began to paint. Self-taught, he works primarily in watercolors. His florals almost always are abstracted forms with the same intense color rendering of his figures…but the added motion of a passing breeze adds yet another element of excitement. Likewise, his landscapes capture the techniques of the Fauvists and are stylized with mountains, hills, plains and lush foliage. His still life subject matter usually captures a chair, a table, a window, a jar and simple pieces of fruit…they always capture a moment of repose and reflection, interrupted by something unknown.


TOM BARNES FINE ART, LLC was registered on Jan 25 2011 as a domestic limited liability company type with the address 85 Poplar Street, Guyton, GA, 31312, USA. The company id for this entity is 11006038. The agent name for this entity is: Barnes, George Thomas. The entity's status is Active now.
Tom Barnes Fine Art, Llc has been operating for 10 years 8 months, and 18 days since it registered.

Similar Name Companies in Other State

Sours: https://www.georgiacompanyregistry.com/companies/tom-barnes-fine-art-llc/
Made In Seattle . Artist 3

The question took Lenochka by surprise. She was preparing for a different scenario. You can't wash off the shame paint from your face, you can't wipe the blush on your cheeks with a.

" She almost freed the candle from the package, leaving only the. End of the suppository in it, which took two fingers of her right hand and put it to the anus of her son. Then, with a sharp movement of her index finger, she inserted the candle into the boy's annus all the way and said: Yes, your hole.

Is dry, Vanechka, just like mine was today. Well, nothing, I I hope that the candle will melt now, the chair will soften, and you will poop in a few minutes.

How to hyperlink a pdf in word