In what is being termed as a 'world record', a powerlifter made history after recording the heaviest bench press ever at the 2021 International Powerlifting Association (IPA) Strength Spectacular Powerlifting Championships.

According to a report in LADbible, Jimmy Kolb benched 1,120-pounds (508 kilograms) while wearing a single-ply suit and took home a gold medal in the 140kg weight class of the Bench Press-only competition.

Kolb is known for his insane ability to bench press with heavy weight, but this time he did something something that no other human has done before.

He had earlier competed in January at an event in Bellmawr, New Jersey where he completed a bench press of 1,050 pounds (476.2 kilograms). Then in March, he raised the bar again when he upped his bench weight to 1,080.3 pounds at another event. So, his new feat shouldn't come as a surprise as he was on his way to breaking the bench press world record.

After his incredible achievement, he paid tribute to those who managed to get him to this point in his career.It takes a big team of people working together to get one man to this record, it would seem.

He shared a post on Instagram celebrating his remarkable achievement, writing: "Everyone always gives the lifter the credit when they do something badass... but I COULD NOT have done what I did yesterday without this family."

Taking a scroll through his Instagram feed is wild. He’s just casually putting up over a thousand pounds on the bench press while training for competitions and poised to break world records. 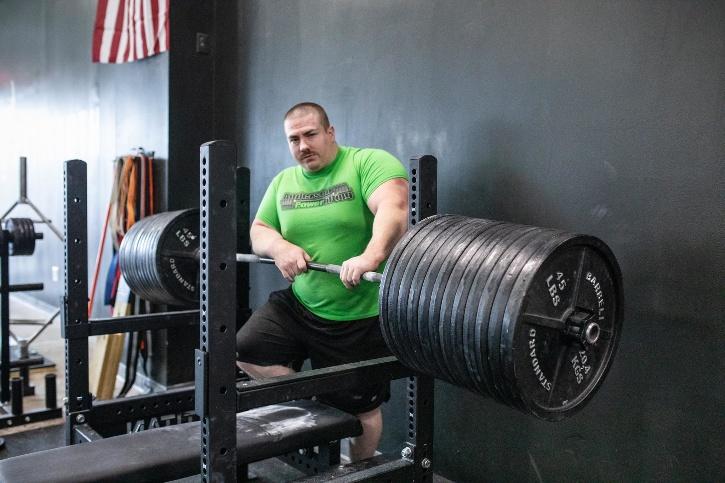 Prior to Jimmy Kolb setting a new bench press world record, the previous record was held by Will Barotti, who bench pressed 501.2 kilograms (1,105 pounds) in a multi-ply suit. That was an astounding lift because it was heavier than the heaviest deadlift ever caught on film — 501 kilograms (1,104 pounds) by 2018 World’s Strongest Man Hafthor Björnsson.

The bench press test is a test of upper body strength, and for many weightlifters is considered the criterion measure of strength. Being able to bench your body weight is a target for many, but the record for the most weight bench pressed is much greater than that.

It must be noted that the different federations have subtly different rules on technique, the equipment that is allowed and whether performance enhancing drugs are tested for. With the advent of bench press shirts, which aid the lift by supporting the lifter's shoulders and provide upward force, the world records have increased significantly.

The current world record "raw" bench press (without a bench shirt) is 350kg / 770 lbs set by Julius Maddox Of Owensboro, Ky, USA in March 2020. These 'raw' records were achieved using wrist wraps. To be considered raw, no bench shirts are allowed; however, wrist wraps, singlets and belts are allowed. (see record video).

With the aid of a bench press shirt, the current record is by Tiny Meeker, who pressed 1102 lb / 500 kg in 2013. See videos of bench press record attempts.

Commenting is closed on this page, though you can read some previous comments below which may answer some of your questions.

If you're currently enjoying an endorphin rush following a great gym workout, perhaps now is the time to look away.

It is all because an American powerlifter has just broken the all-time world record for the heaviest bench press in history.

For those not involved in the discipline, bodybuilding and weightlifting can seem a bit of a weird past time to enjoy. For those that are involved, however, it is exciting and exhilarating.

In most sports, world records are broken fairly regularly, whether it be a quickest knockout in boxing or fastest goal in football.

For power lifting, though, there has been one record that has withstood the test of time. That is until now.

Jimmy Kolb has broken the all-time world record for the heaviest bench press by lifting a whopping 508 kilograms (1,120lbs) at the 2021 International Powerlifting Association's Strength Spectacular Powerlifting Championships in Pennsylvania.

Kolb has reportedly been on track to defeat the record having completed a series of challenges at events in the build-up to the event in northeast America.

A video shared on Instagram showed Kolb as he completed the impressive feat and afterwards  he paid tribute to all those who supported him on his journey.

He said: "Everyone always gives the lifter the credit when they do something bada**... but I COULD NOT have done what I did yesterday without this family."

He added: "Thank you for not only being my friend, spotter, and team member but for bringing this community together."

"Thank you for being my handlers, hand off crew, and always being there to keep me put together and healthy.

"I love you guys and I'm so proud to call each of you my team mates and friends.

"Thank you for all you do for ME, I only hope to give back to each of you what you give to me."

His 508-kilogram lift means he broke the previous record by around 6.8 kilograms (15lbs).

Open Powerlifting claim he has competed in 29 powerlifting events since turning 18 - winning 21 and being disqualified from eight.

And since then, fantasy has taken a major role in sex. Once a work friend came to visit them. We sat down in the evening and drank well and remembered.

In general, I worked her throat and by the next arrival of Irina, Tanya was swallowing my penis whole. I poured it down her throat, so that almost nothing got into her mouth. And when my husband was in the city, I played pranks with her a couple of times right in the car.

Roman looked into those large brown eyes, which, although they did not match the color of his beloved wife at all, were painfully reminiscent of her. Pitiful look in her youth. This smile, this anxiety, it all seems to have remained from Lerochka. Nostalgia for youth, even more flared up in the heart of Roman.