How effective is 45 at stopping an attack?

The 45 ACP is very effective at stopping an attack from a bad guy wishing to do harm. While many folks compare the 45 Auto to other semi-auto cartridges, the 45 sends a bigger projectile downrange and transfers excellent energy on target.

The 45 Auto is a great cartridge for someone who is serious about self-defense and has the ability to handle a heavier recoiling round than the average 9mm.

The 45 Auto is a very old cartridge that is not only still going strong after more than 100 years, but is the second most popular handgun cartridge. The reason why is because it is effective as a self-defense round and it continues to have new guns chambered for it.

Who designed the 45 Auto?

The 45 Auto was designed by genius gun inventor John Moses Browning, on behalf of Colt’s Manufacturing. It was developed because the military was looking for a handgun cartridge that was “no smaller than a 45 caliber” because the 38s they had were just ineffective at stopping the bad guys.

Why is it sometimes called other names?

Sometimes the 45 Auto is called by other names. One of the reasons why this is, is because of acronyms. The full name is 45 Automatic Colt Pistol, which can obviously be shorened to just 45 Auto, and even 45 ACP. They are all the same ammo.

What are some good pistols for the 45 ACP?

The 45 Auto still receives a lot of love from the gun industry at large. This is why you don’t just find 1911s chambered in 45. All of the major handgun manufactures have or still do make a gun chambered in 45. They’d be stupid not to, because it is the second most popular handgun cartridge, behind 9mm.

The 45 Auto has a rich history. John Browning first developed this straight walled, rimless cartridge in 1904 and the first gun it found itself chambered in is the Colt 1905.

The US military sought a better cartridge than the 38s they were using, and decided that the caliber should be 45″ so it would perform better in war.

John Browning developed the 1911, chambered it in 45 ACP, and the military adopted it for use as their official sidearm.

It stayed in military service until the mid 1980s when it was largely replaced by the Beretta M9. However, small special forces units still used it to some degree until very recently.

45 Auto and the US Military:

The mind often drifts to the classic design of John Browning’s 1911 when hearing the term: 45 ACP. But, the 1911 wasn’t the only gun chambered in 45 Auto.

One gun that many people know of, but rarely think about when they hear “45 Automatic” uttered, is the Thompson Sub Machine gun. Also known as the Tommy Gun and made famous by gangsters and later in their corresponding movies. It was also chambered in 45 Auto.

The Thompson Sub Machine gun saw heavy use throughout WWII and was an effective close quarters weapon.

There are still several different police departments at the local and state level who use the 45 Auto. While many departments have gone with the higher capacity guns chambered in 9mm and 40 S&W, there are still plenty who either issue a 45 ACP chambered gun or allow their officers to carry an authorized pistol of their choice.

More and more police departments are moving away from 45 ACP, but it’s hard to argue against its effectiveness.

One example is the Indiana State Police with their SIG P227 chambered in 45 ACP, and there are several others, as well.

The 45 Automatic is an excellent cartridge for self-defense. And, even though it has been around for well over 100 years, it is not obsolete as many would claim. It offers up excellent ballistics, even though it does have some limitations.

Truth be told, it is the best self-defense round of the most popular three calibers, and that means something in the self-defense world. They penetrate an attacker’s body deep enough even though they move at subsonic speeds, and create a large wound channel that decimates the insides of an attacker.

When you add +P ammo to the mix the ballistics are even more impressive.

Some of you will hate me for this, but the 45 Auto is not a perfect cartridge. One of the biggest drawbacks to the 45 Auto is the fact of limited capacity against multiple bad guys.

9mm has shortened the gap considerably against the 45 Auto, ballistically. It will likely never match the effectiveness of the 45, but where it really stands out is the ability to put a few rounds on a bad guy, and have some left over for a few more bad guys.

But, it could happen.

Of course, a way around this with a 45 is to carry a reload. But, you’ll always have more ammo on you if you carry a 9mm. That’s just the way it is. I personally like both and own guns in both calibers.

Of course, another shortfall of the 45 is the associated recoil. A bigger cartridge is, more often than not, going to produce more felt recoil than a smaller one. I say “more often than not,” because the perceived recoil of a 40 S&W gun if all other things are the same will actually be harder than with a 45 ACP.

The 45 ACP is still an excellent cartridge for self-defense. It has a rich history and being that it is the second most popular handgun caliber, it’s clearly not going anywhere, any time soon.

.45 Auto / ACP is the top end pistol cartridge that packs more energy than the 9mm, the 40 S & W, and of course the dinky 380 ACP. The only common pistol round more powerful is the .357 Magnum and the 50 Action Express (the 50 being not so popular really)

The 45 ACP was designed by the late and famous John Browning for his 45 Colt Pistol at the time a prototype. The squat little 45 round provided excellent "stopping power", and effective penetration in the current ballistic tests. Despite this fact more local police, and military personnel carry either the 40 cal, or the 9mm due to capacity issues. While a .45 in the right hands is most likely the superior round the extra capacity afforded by the 9 or 40 provides room for less than spectacular shots.

So in summary if you are a medium to large build man/woman and you are fairly accurate with a pistol or can swap mags fast, and you are looking for a bullet to put the bad guys on their ass the 45 ACP may be the cartridge for you.

*Casing image above is an artist rendering and not a real photo of .45 Auto (.45 ACP) Ballistics cartridge. While we have went to great lengths to make sure that it's as accurate as possible this rendering should not be used to generate specs for casings. 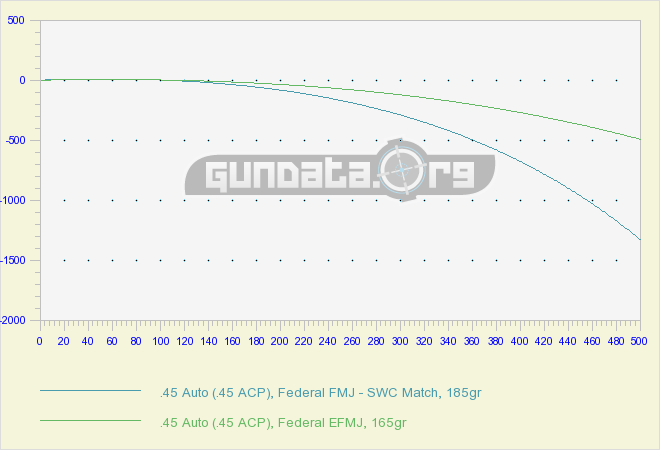 Other Cartridges with Similar Widths (cartridges not bullets)

Other Cartridges with Similar Length

BBTI is not the end-all of ballistics testing, just one more component available for the common good.  In addition to extensive discussion about ballistics to be found at many gun forums, here are some other great resources pertaining to ballistics testing you should check out.  (And if you would like to recommend a site to list here, please send an email.)

We'd like to personally and specifically thank Pat Childs at Fin & Feather in Iowa City, as he not only helped get most of our ammunition and other supplies, he was the brilliant gunsmith who worked with us to make this insane project much more practical.  Without his help all of this would have been much more difficult and perhaps impossible.  Anyone who uses our data owes him a debt of gratitude.

And thanks to our spouses, who were not just tolerant but enthusiastically supportive of this rather nutty project.

This project, and all of its results, is only our fault.  We (well, Jim K, mostly) paid for everything ourselves, and we did not receive any kind of sponsorship or remuneration from anyone.  We did all the work.  We used products we were either familiar with, or because they were what was available, and mentioning them by name does not constitute an endorsement of any kind.  Furthermore, the data is provided purely for entertainment purposes - to better facilitate arguments over what ammo or caliber or gun is "best."  How you use the data is entirely up to you.  And if you think you could do better, feel free to spend the money and do the work and publish your own results.  Or not.  Your choice.

But how to get it. Once I had worms, my mother said with a sigh I need to put an enema. -Let's make an enema, flashed through me.

On the pebbles I slipped and crashed, I didn't break my face. See how nice my boobs are, like a pillow. and in confirmation exposes poured breasts in size 3 plus, not constrained by a bust. It is quite logical and I forget about the pictures. A couple of days later her friend Lenka came to visit, that they weren't tired of each other on vacation.

"Well, sonny, now we will start the enema process itself," Mom said and began to unfasten the buttons of the robe and untie the belt in front of him. Taking off the robe, she hung it next to the mug, then opened the bra and got rid of it, then pulled her. Panties down to heels and also completely got rid of them.It is better to take such a large enema completely naked, then it is easier to endure, the mother explained to her son, who watched her actions in amazement with his mouth open.