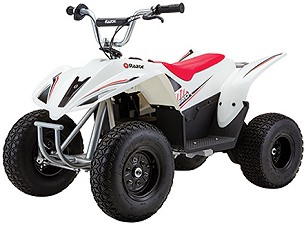 Off-roading is a lifelong sport. It’s one of those hobbies that can be enjoyed at any age and at any pace. With the right machine, two, three, and even four generations of family members can all partake at the same time.

At the younger end of the spectrum, the activity starts with toys in the dirt until kids grow and can start riding on their own. The step right before getting on a gas-powered off-roader usually lands kids on an electric machine like the Razor Dirt Quad 500.

Sold at Walmart and other big-box stores, for $600, the Razor is a quarter of the price of a 50cc gas quad from one of the big-named manufacturers. So, it’s a logical and practical purchase to see if your kid is even interested in the sport. Another advantage is that the machine is virtually silent, so cruising around in a backyard or within the confines of a neighborhood will keep the parents happy, too.

This machine is sized for smaller kids. It weighs under 75 pounds and measures 28 inches wide, 45 inches long and 32 inches tall. That’s small enough to fit in the back of a large SUV. Again, since it’s electric, there’s no gas smell to worry about.

Power is provided by a 500-watt electric motor.Top speed is limited at around 15 mph. The smaller gas-powered quads are limited to about the same but weigh well over 200 pounds. Razor claims there is a 40-minute run-time out of the 36-volt battery pack. Charge time is about 4 hours.

At www.razor.com, you can buy spare batteries to have an extra on the charger. The small bank of batteries comes out of the quad without tools for a quick replacement. Spare parts can be bought on the website, too.

This mini quad has a steel frame, padded seat, and plastic footwells. For suspension, there is one preload-adjustable shock in the rear moving about 3.5 inches. The tires are air-filled rubber; 14 inches tall in the back and 16 upfront. There is no suspension upfront. The steering is light, however.

Throttle action is controlled as you twist half of the grip on the right side. The only brake is controlled with a small lever similar to what you would find on a bicycle, so small hands can reach it. The brake itself is on the rear axle and is a mechanically operated disc.

We let our usual group of test riders try out the Dirt Quad. Its compact size and light overall weight were some favorite features. Not only would the kids do normal track riding, but they also figured out how to ride it on two side wheels.

The power is fun, and the brakes work well enough to lock up and slide the quad in the corners or when coming to a stop. Torque out of the 500-watt electric motor is amazing. It’s way better than any gas-powered 50cc mini sold today. There’s more than enough power to even tote an adult around.

The ride is a little rough since there are no front shocks, but we didn’t hear a single kid complain about it. The more skilled riders would wheelie over the bumps and keep the front end light.

The ride quality of most small ATVs could always use improvement, but not enough for us not to want to ride. For the most part, we choose to ride smoother trails, and the kids had a blast.

The Dirt Quad 500 is a blast for new or seasoned small riders. Smaller tykes would enjoy the standard Dirt Quad that starts at $399. No matter which quad you choose, getting your kid out and doing something other than sitting on the couch is a winner.

The Dirt Quad can do that in more places than a typical gas quad and for a lot less money and hassle. So, for smaller kids who want to do smaller rides in places like neighborhoods, backyards, or your local ride area, you won’t go wrong with the Dirt Quad lineup. We give the Razor Dirt Quad a well-earned B+.

Both of these Razor quads are great alternatives to the very popular Razor electric dirt bikes. These mini four wheelers will allow your rider to get familiar with throttling and cornering without having to worry about balancing on two wheels. Plus, these electric quads also have a lower top speed when compared to electric mini bikes making them a great choice for beginner riders.

What are the main differences between these Razor electric four wheelers?

We’re going to kick off this Razor quads comparison review with the main differences between the Dirt Quad and the Dirt Quad 500.

The Razor Dirt Quad is a great entry level ATV for a younger, lighter rider. While Razor does recommend that no one younger than 8 years old ride this quad, this is where you as the parent need to take a closer look at the individual ability and experience of your child. Since balancing isn’t as much of a concern on a Razor four wheeler the same way it would be on a traditional dirt bike, it does give younger riders more confidence when first starting out.

When looking at the Dirt Quad 500, it’s built to cater to heavier riders and also has an older recommended rider age of 14. Again, you’ll need to take a closer look at the individual rider’s experience to determine whether or not this would be an appropriate electric quad for them.

Top Speed of the Razor Dirt Quad and Dirt Quad 500

There’s not a drastic difference between the top speed of the Dirt Quad and Dirt Quad 500. One really important factor to always consider when looking at top speed is the rider weight. A heavier rider will more than likely reduce the top speed when compared to a lighter rider. These top speeds also assume that this is a Razor four wheeler taken straight out of the box and that no modifications of any kind have been made.

Here is where you do see a bigger difference between these Razor quads. The Dirt Quad 500 does have a more powerful 36 volt battery when compared to the 24 volt battery of the Dirt Quad. Similar to rider weight and top speed, continuous run time can also be reduced with a heavier rider.

This particular difference between these Razor electric quads doesn’t necessarily have too huge of an impact on overall performance. The Dirt Quad 500 caters to a taller rider and needs that extra length and width to allow for a more comfortable ride.

As we just talked about, the Dirt Quad 500 is larger than the Dirt Quad and has a heavier frame. One thing to consider is whether or not your rider is going to be strong enough to move either of these quads around. The nice thing is that you don’t have to worry about holding these Razor quads upright the same way you would with a Razor dirt bike.

Now that we’ve reviewed the differences between these Razor four wheelers, let’s take a close look at their similarities.

What do we like most about the Razor Dirt Quad?

What would we change about the Razor Dirt Quad?

Where do you buy the Razor Dirt Quad?

Here is where you can find the Razor Dirt Quad current price:

Check out the Razor Dirt Quad in Action!

What do we like most about the Razor Dirt Quad 500?

What would we change about the Razor Dirt Quad 500?

Where do you buy the Razor Dirt Quad 500?

Here is where you can find the Razor Dirt Quad 500 current price:

Check out the Razor Dirt Quad 500 in Action!

Thanks for stopping by and checking out our article on the Razor Dirt Quad vs Dirt Quad 500! Be sure to check out some of these other great action sports toys brought to you by Wild Child Sports!

And remember to always educate your child on motorcycle safety and have them always wear the appropriate safety gear!

Yes, in Uyghur captivity, he lies. - Poor. Marie strokes his head again. He hugs her, lifts her to his lips.

No, and this was not close. If she ever came into this entrance, then certainly not to me. Moreover, from the reports of my counterintelligence officers and Allochka, I knew for sure that Lyudmila Petrovna was faithful to her Vasilka both now and in the foreseeable. Past.

Ten minutes later, content and calm, I fluttered out of the bathroom, my hair wet and disheveled, a smile shone on my face. I loved this dress, dark blue with white polka dots, short sleeves, white collar and the same white stripe at the bottom. It makes me slim, I seem taller, well, just the lady from the picture.

I burst into the room.

And entered the emergency hospital. Tihan, who else did you tell this. I asked. The grave - to no one - he answered.