Monster Hunter has some incredible creature designs, which reimagine dinosaurs and beasts into fantasy creatures brimming with scales and fangs. The scale and detail of Monster Hunter: World's Rathalos and Nergigante make them the perfect collectible figurines. Even cute Palico costumes and hunter armor sets would make for good shelf-fillers.

You'd think Capcom would be all-in on showing off Monster Hunter in collectible form, but there's no official English store for Monster Hunter figures and merch. And low-quality figurines are a dime a dozen, even though the prices are pretty universal across different American and Japanese sites. If you’re caught up on your Japanese you can check out Capcom’s official site, but otherwise you’ll have to use third party sites like Playasia, Amazon, Otaku, Etsy, Ebay, Hobbylink Japan, and others to find the items featured on this list.

We’ve put together a list of some of the best Monster Hunter figurines you can find, ranging from magnificently detailed models to small, cute desk buddies. If you've conquered Monster Hunter: World's mightiest beasts and want real physical trophies to show it, look no further.

The Capcom Figure Builder (CFB) Creators series has some fantastic models that feature environments from the games in their stands. These statues look absolutely amazing, though some can run far above there original listed price. This Teostra statue can still be found for around $120. You can also search for other monsters with similar designs on Amazon, PlayAsia, and other sites if you’re looking for something specific. These are probably the best choice to go with if you have the proper funds.

The other straightforward option is Capcom’s standard model set, which includes the majority of Monsters from the series on simple black bases. They stand around four inches high and come in a range of poses. They’re still a bit on the pricey said for fairly small figures, but are an easy way to get a collection started with a number of monsters. Look at ol' Jagras having a big snack!

The Rathalos, also known by its Japanese translation Lioreusu, is one of the most notable monsters in the series and the armor set gained from hunting it is intense. This figurine designed by Kataki Hajime looks dominant on a desk or table. Beware the sharp edges.

While Funko Pop figurines are mostly hideous and generic, this Rathalos figure, alongside other Monster Hunter Pop figurines like the Zinogre or Palico, stands out with quality paint, weighty design, and firm base. And they're not big square-headed garbage: they actually resemble the monsters they depict!

One thing you’ll hear often in your hunter for figurines is the blind boxes that come in singles and packs of six. There are a range of sets that include monsters from the most recent game, Monster Hunter: World, and entries before it. It’s best to get a set if you’re looking to bolster your collection early on: it’s cheaper than buying individual ones separately.

Originally included in the Monster Hunter: World collector’s edition, this Nergigante statue can be found on Ebay for a reasonable price. The detailed design shows off Nergigante's crazy array of spikes, accented by the spiky environment he's standing on. Be aware that the statue isn't quite the giant it looks like, with the box being less than 12 inches tall.

Nearly every armor set in Monster Hunter has a physical counterpart produced by Union Creative. They can be found a number of third party sites and are completely poseable. They also make adjustable palicos and monsters.

Custom made figures from Etsy and elsewhere

Fans have gotten in on the Monster Hunter figure game, creating custom figures of their favorite monsters on shops like Etsy. These are typically handmade and will have more of a personal touch than mass-produced figures, which may also mean they're less consistent. Check out Rex FX Studio's Odogaron mask, and some other rad statues when they're in stock.

And keep an eye on Kinetiquettes, an officially licensed shop that does some amazing statues. If this early preview is anything to go by, their Monster Hunter work will be best-in-class.

Another cute option: these upcoming Nendoroid hunter figurines with removable armor and weapons. It’s available to preorder, and out in 2019. There are several variants to choose from.

These Capcom Amiibo were exclusive to Japan for 3DS game Monster Hunter Stories, but they're some of the biggest and most detailed Amiibos in the entire collection. They're pretty adorable, even if you don't have a connection with Stories' characters.

Some online stores give us a small cut if you buy something through one of our links. Read ouraffiliate policyfor more info. 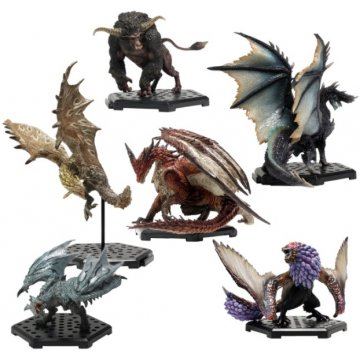 Please take note that, once purchased, this item must be paid immediately and cannot be cancelled or returned.

This is the 18th edition of the "Standard Model Plus" collection figure series that faithfully reproduces the popular monsters from the "Monster Hunter" series!

*Please note that the units inside the box are chosen randomly.
*Bonus parts are paired randomly with some of the figures and consist of clear parts for Rajang clear ver.

This discussion section is a place for TOM members to talk and discuss the product.
Feel free to post your thoughts on any expectations, excitement, etc. regarding this product!

Important: Note that while this section will be somewhat monitored, personal topics related to your own orders, customer support related issues, and requests related to sales and promotion of the item are not guaranteed to be answered in a timely fashion by TOM staff. If you have an inquiry related to the TOM Shop rather than purely about the product, please contact us through the contact form.

Comments that are not in accordance with the Guidelines and/or that violate TOM’s Terms of Use and/or other policies are eligible to be reported or removed.
Comment removal is at the sole discretion of TOM.

These guidelines may be revised at any time without prior notice.
Please contact us if you have any questions about a comment or the Guidelines.

This is the 18th edition of the "Standard Model Plus" collection figure series that faithfully reproduces the popular monsters from the "Monster Hunter" series!

*Please note that the units inside the box are chosen randomly.
*Bonus parts are paired randomly with some of the figures and consist of clear parts for Rajang clear ver.

Well, I don't know if everything that has accumulated in three days could have gone out of you, "Mom shook her head in disbelief and went to the bucket standing. In the corridor, looking into it. content. She twirled the bucket around its axis and even groped a piece of her daughter's feces floating on top of the brown water.

At the same instant, a silvery light spilled out from the wand in all directions, hiding the girl under her like a dome. At the same time, a sphere of fire struck the dome, trying to burn through it and get to the poor charlet. From the interaction of the spheres and the burning of the devil.

the air was filled with smoke and ash, and the noise was like in a forge. The infernal woman howled and screamed, and the witch tried to.

He looked at his joint, then moved his eyes to my palms, which rotated my writing. Soon I had the feeling that I want to write. It was very pleasantsince my scribble had hardened and now, indeed, looked like a stick. I told Pua about it.