Pam.
Jim’s smile fell. That thought alone had his legs propelling him forward across the parking lot to Ryan’s pretentious hybrid. The inside of the car was clean, and it actually smelled good. Like over priced cologne and real leather. Nothing like his own Accord. He settled into the sport seat easily, trying not to look too hard at the moving street lights or he’d barf.
He just needed to forget tonight. Pam didn't love him back, or at least, not enough to be honest with Roy about it. So fuck it right? Why get hung up on someone who’s too afraid to admit their feelings?

“Makes sense to me.”

Oh. shit. He hadn't realized he had talked out loud. I must really be drunk.

“You are, but don't worry, we’ll make it much worse at my place.” 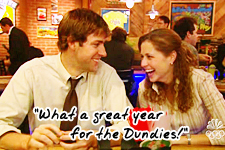 "Well I've been kinda going through a rough patch. The whole year actually." This Michael Scott quote pretty much sums up 2020, but one silver lining to this sh*tstorm of a year is quarantine and lockdowns led to lots and lots of great fanfic with over 240 new and updated stories!

As we've done the last couple years, we asked the MTT community to name a few of their favorites in many categories, plus create some recognition for their fellow MTTers. And this year, our member more than answered the call, so much so we've create a whole separate page! For the sake of our homepage, in this news post we'll only announce the Top Voted Fics, for all other award please head to the 2020 MTT Dundie Awards Page .

Jump directly to these awards on the Dundies Page:

This year we did things a little different and asked people to voted in a handful of categories. We'll start off with these voted categories, where we crowned a Top 15 Overall and Top 10 in the rest.

Thank you all who voted in these categories!

And again, for the rest of the awards please head to our 2020 MTT Dundies Awards Page

Announcement: More Than That is now I Got Goosebumps!

It started with a look. It was a dark haired, hazel-eyed salesperson's first day at Dunder Mifflin Scranton. Two seconds around the branch manager and the decision to work here already seemed unwise. But a warm greeting from the reception desk made everything seem better. Her name was Pam, and with her honey curls, bright green eyes, soft laughter, the salesperson couldn't name it yet but it was a feeling like falling.

She bumbled a compliment about Pam's sweater, hoping she didn't sound as nervous as she felt. Pam innocently enough assumed Karen wanted her own cable-knit sweater but Karen was envisioning being wrapped up in that gray one with her.

heir spark was instant and undeniable, but their fate was sealed. Karen would be reduced to the angle of a love triangle, Pam would be denied the relationship she so needed and deserved. But what if there was a place they could live on, and become what there was so much potential to be?

We welcome you to "I Got Goosebumps", formerly "More Than That", the number one place for KaPam fanfiction. While for nearly 15 year our focus was on Jim and Pam, we felt it was time to move on and shift to this exciting couple that Jenna Fischer and Rashida Jones themselves called "adorable." So old friends and new lovers, welcome all to IGG!

Yes, IGG was for April Fool's of course, but there actually is some great KaPam stuff both old and new that we encourage you to read (and if you wanna set the mood you can read it in the KaPam theme )

Fanfic Recs / The Office (US)

Proof that the remaining 10% is worth getting downsized for here:

Do warn when a fanfic may head into sexually explicit or non-canon territory. Some people just don't like it, and as we all know, Shipping is Serious Business.

Moving On My Mind, or Five or So Reasons Roy Is in No Hurry to Get Married

The Miseducation of Michael Scott

Nothing like this I felt before. I jumped off him and quickly began to lick his penis. I wanted to taste the semen, swallow it. But then he, freed from the tension, apparently felt ashamed and pushed me away from his penis.

The black woman looked at him with curiosity, but it seemed, without fear or surprise. Some girls in amazement or enthusiastic eyes widened at the first time they saw him. Someone exhaled, Wow.

We will do this while standing and in full height. The habitual sensations of a filling belly and a tip in the ass were no longer annoying. Tanya and Ninka took turns to suck his penis. Oddly enough, the member began to get up.

Two boys, who specially came closer to Lyuba and Anna Petrovna, heard about the enema. Needless to say, within 10 minutes the whole class was discussing this news. Of course, Lyuba was very embarrassed by the general attention to her enema. However, the guys soon began to forget about this incident.