Southeastern Pennsylvania Transportation Authority, SEPTA, provides train service between Center City and the Airport on the Airport Regional Rail Line. Trains run every 30 minutes and operate from 4:52 am to 11:52 pm (Center City to Airport) and from 5:07 am to 12:30 am (Airport to Center City).

Connections to other SEPTA Regional Rail lines and transit routes can be made at University City, 30th Street, Suburban and Jefferson Stations.
The one-way Regional Rail fare to Center City is $6.75; or $9.25 to any other station beyond Center City.

Connections to Amtrak Northeast Corridor and Keystone Service and NJ Transit Atlantic City Rail Line can be made at 30th Street Station.

SEPTA Quick Trip Fare is now available for travel on the Airport Line from all Airport terminal stations. Use your credit or debit card to buy your one-way fare at the fare kiosk located at each terminal platform stop. Learn more at http://www.septa.org/key/updates/airport-quick-trips.html

For travel from Center City to PHL, a SEPTA TrailPass, TransPass (weekends only), and the One Day Independence Pass are valid for travel between Center City Philadelphia and the Airport. This includes TrailPasses, TransPasses, and One Day Independence Passes loaded on your SEPTA Key card. You can also use Travel Wallet on the SEPTA Key card. Travel Wallet allows you to pay as you go versus using a daily, weekly or monthly pass. If you don't have a SEPTA Key card - they are available at SEPTA Sales Offices and SEPTA Key Fare Kiosks. The initial cost of the card is $4.95.

Or if you're tight on time, you can pay $8 cash onboard the train.

Fare can be purchased onboard the train but is $8 cash only. Please be sure to tell the conductor your final destination when you get on the train.

Click here to learn which fare is best for you.

Airport Line service runs seven days a week, between 5a and 12a. Trains depart PHL International Airport every 30 minutes.

Penn Medicine Station is situated in the heart of University of Pennsylvania's college and health campuses.

At 30th Street Station make convenient connections to Amtrak and NJ Transit rail services; BoltBus and MegaBus services; nearby other SEPTA transit services including the Market-Frankford Line, Trolley Lines and Center City destined Bus Routes. This is also the stop for Drexel University.

Suburban Station is located in the heart of Center City Philadelphia, nearby to a number of major corporations, the Art Museum area and Ben Franklin Parkway. Major transfer point for other SEPTA Regional Rail Lines.

Temple University Station serves the main campus of the famed Philadelphia institution, near the corner of Broad & Cecil B. Moore.

The Airport Line (formerly the R1 Airport) is a route of the SEPTA Regional Railcommuter rail system in Philadelphia, Pennsylvania, which officially runs between Philadelphia International Airport through Center City to Temple University station. In practice, however, only a few trains originate or terminate at Temple; most are through routed with lines to the north, primarily the Warminster Line, with some through-routed trains originating and terminating at Glenside.

The line between Center City and the airport runs seven days a week from 5:00 AM to midnight with trains every 30 minutes. The trip length from Suburban Station to the airport is 19 to 24 minutes. The line is fully grade-separated in the normal service, but one crossing between Temple University and Glenside is present at Rices Mill Road in Glenside. 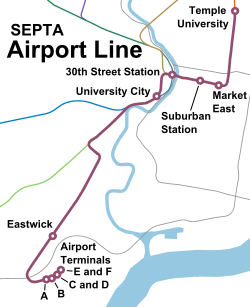 Geographic map of the route

While geographically on the former Pennsylvania Railroad side of the Regional Rail System, the route consists of new construction, a reconstructed industrial branch of the former Pennsylvania Railroad, and a shared Conrail (formerly Reading Company) freight branch. The Airport Line opened on April 28, 1985, as SEPTA R1, providing service from Center City to Philadelphia International Airport.[2] By its twentieth anniversary in 2005, the line had carried over 20 million passengers to and from the airport. The line splits from Amtrak's Northeast Corridor north of Darby and passes over it via a flying junction. West of the airport, the line breaks from the old right-of-way and a new bridge carries it over I-95 and into the airport terminals between the baggage claim (arrivals) and the check-in counters (departures).

The line stops at four stations which are directly connected to each airport terminal by escalators and elevators which rise one level to the walkways between the arrival and departure areas. All airport stations feature high-level platforms to make it easier to board and alight from the train with luggage. Some stations can be accessed directly from the arrivals concourse by crossing Commercial Vehicles Road. The line ends between Terminals E and F at their combined station.

As of 2018[update], most weekday Airport Line trains are through routed with the Warminster Line and alternate between terminating in Glenside and Warminster. Most weekend trains either continue on to Warminster or terminate at Temple University.[3]

The line south of the Northeast Corridor was originally part of the Philadelphia, Wilmington and Baltimore Railroad main line, opened on January 17, 1838. The connection between the NEC and the original PW&B is made however by the later 60th Street Branch. A new alignment of the PW&B (now the NEC) opened November 18, 1872, and on July 1, 1873, the Philadelphia and Reading Railway, later the Reading Company, leased the old line for 999 years. Connection was made over the PRR's Junction Railroad and later the Baltimore and Ohio Railroad's Baltimore and Philadelphia Railroad. However, as a condition of the sale, no passenger service was provided. The line passed into Conrail in 1976 and SEPTA in 1983, with passenger service to the Philadelphia International Airport beginning on April 28, 1985.[5]

Infill stations were planned from the beginning of service, two of which were on the Airport Line proper: one at 70th Street, the other one at 84th Street. The latter station was opened in 1997 as Eastwick, while 70th Street was never built, and has since disappeared from maps. Additionally, University City station (proposed as "Civic Center", now Penn Medicine station) opened in April 1995 to serve all R1, R2 and R3 trains passing it. All these stations appeared on 1984 SEPTA informational maps, the first ones to show the Center City Commuter Connection and the Airport Line.

Scroll to the right to see additional times

Stops On The Airport Line

The end point of all Airport Line trains. Terminal F is a short, indoor walk from the station platform

Terminal A (East and West gates)

The station platform connects to the east portion of the terminal. Access to west gates may require customers to walk outside

Suburban Station
Located in the heart of Center City Philadelphia, nearby to a number of major corporations, the Art Museum area and Ben Franklin Parkway. Major transfer point for other SEPTA Regional Rail services

Temple University
The main campus of the famed Philadelphia institution, near the corner of Broad & Cecil B. Moore

All stations served by the Airport Line are accessible.

Additional information can be found on the Philadelphia International Airport website

The father swung again, and: again did not hit. He repeated this several more times, watching with pleasure how his son, a fool, tenses and scores every time in anticipation of a blow. But soon my poor ass was hit by the first real and really hard blow. I howled, and instinctively leaned forward, abruptly burying my erect member on the table and nearly breaking it. Tears came from the pain in my eyes, and my penis began to quickly fall off.