Websites that are related

By using our site you agree to our use of cookies to deliver a better site experience.

Craigslist Pet Ads: What You’ll See, How to Reply, and What to Expect in Response

Concerned about animal abuse facilitated by Craigslist posts, an Animal Legal Defense Fund supporter began responding to “pet” ads in September 2020. After responding to more than 400 ads, the supporter shares their experiences and tips for helping protect animals being traded on the platform.

For the past decade, animal protection organizations, The Dodo, HuffPost, and many other outlets have warned people not to post unwanted pets on Craigslist because they’re vulnerable to winding up tortured and killed, sold to laboratories to be for use in often painful experiments, fed to snakes, and used as “bait” animals by dogfighters. In September 2020, something nudged me to start replying to Cleveland Craigslist pet ads. In 60 days, I replied to 413, an average of seven per day. If you decide to help animals in your city by doing the same, the following is what you’ll see, how you should reply, and what emails you can expect in response.

After two months of replying, an ad with the headline “Willing to take all unwanted animals” appeared at the top of Cleveland Craigslist’s pet section. It read, “willing to take peoples [sic] animals that they don’t want or can’t take care of.” The map showed an area where federal agents have raided dogfights and garbage collectors have found dead dogs in trash bags the past two years.

After spending two hours re-replying to every ad beneath it to warn people not to reply to the ad and to be on guard in case the person who posted it replied to theirs, I contacted numerous animal protection organizations who didn’t respond. Getting nowhere, I emailed a couple of investigative reporters at news stations, thinking they would jump at an animal cruelty story during the holiday season. They didn’t. Eventually, the co-founder and executive director of Animal Help Now, David Crawford, suggested I contact the Animal Legal Defense Fund.

When I emailed the Animal Legal Defense Fund, I had no idea that it had already launched a campaign to end animal posts on Craigslist. As I read their response to me, my eyes welled up. I’d felt that nudge September 12 for a reason: I could provide ammunition against Craigslist and help shut this section down after a decade of animals dying in painful, horrible ways.

If you decide to start replying to Craigslist pet ads, be sure to check your city’s “free stuff” section as well because some people can’t find “pets,” which is located in the “community” tab rather than “items for sale.” Not surprisingly, both sections are heartbreaking and scary. In addition to an astounding number of people posting black cats and kittens on Craigslist days before Halloween, I’ve encountered:

I shouldn’t have to Google “Are _____ legal in Ohio?” but since Craigslist founder Craig Newmark relies on users to be his “watchdogs,”, I do.

How to Reply to Craigslist Pet Ads

You can help shut down Craigslist’s pet section, too, by replying to ads and taking screencaps of anything that doesn’t look right. Replying to ads is a simple matter of copying and pasting information that won’t trigger spam detectors into the body of an email. Because most people only read the subject line, I send the attention-grabbing headlines like below:

I highlight each headline in yellow, and I paste a sentence from the article or write my own beneath each headline. For example:

A “Rehoming Fee” Won’t Protect an Unwanted Pet from Danger on Craigslist
Ronald Fraser Golden proved that in 2013 when he bought 22 kittens from Craigslist, named them, and then killed them by throwing them on the floor and stomping on them or strangling them. – https://www.waff.com/story/23661750/police-athens-man-had-cat-room-for-killing-kittens/

We live in the era of “fake news,” so I always include links to the articles so people can read them in their entirety. I also send multiple links. Beneath the headline about the Missouri man who was killing free cats he obtained from Craigslist, for example, I link to a Washington Post version and a Fox News version to cover all bases.

Two days after I started replying to Craigslist ads with links to articles about animals being tortured and killed after they were obtained from the site, I received constructive feedback: “a better email to send would be educating owners on how to screen for potential threats etc.” So now I send the following rehoming tips people have sent me as well:

What to Expect in Response to Your Reply

Responses to your reply will fall into one of four categories:

I’d sleep better if you would help me by replying to Craigslist pet ads in your city until we’re able shut down all animal transfers on the platform. Thank you for caring about animals.

A post, which has been shared in several local pet advocacy groups in the local area has many pet-parents concerned.

The post, which was published on the Akron-Canton Ohio area pets community by an anonymous poster, is below along with more information. 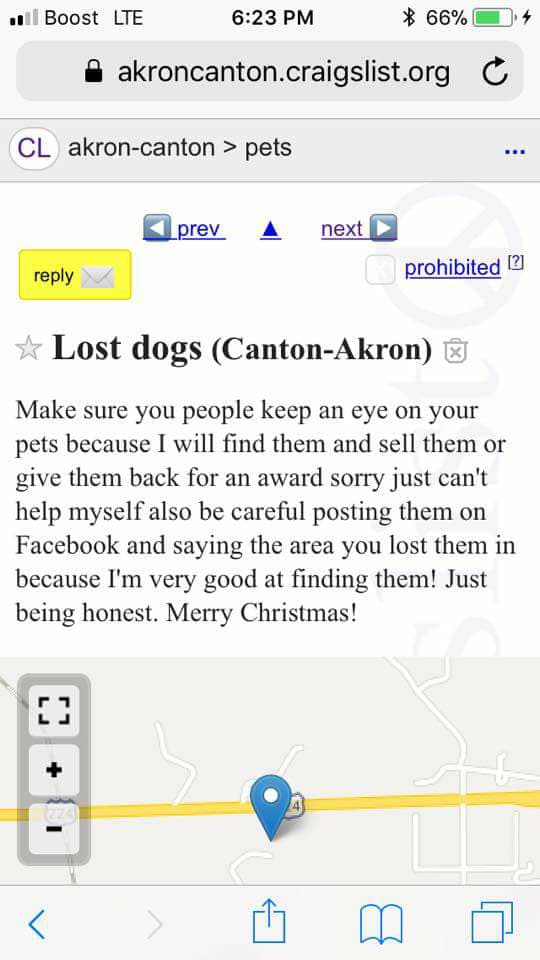 Craigslist is a web platform where users can anonymously post in the forums and classifieds to keep their identities safe while connecting with the community; unfortunately some people take advantage of the lax site-moderation, resulting in offensive and alarming posts like this.

The post has since been taken down, most likely because it was flagged by users as offensive, but it’s not being forgotten – as it has been making its rounds on Facebook.

“Whether it’s fact or fiction , Everyone needs to Be Aware and Not take their eyes off their dogs /cats when they are Outside ( leashed , fenced or roaming as Bad Things can Happen to the Pet,” a Facebook user of the group Lawrence County Animal Helpers replied on the Facebook post.

While some people believe there is someone sick enough to do this, others think the post was sarcastic.

“I think it’s just someone trying to sarcastically make a point that dogs need to be watched at all times,” another Facebook user’s comment reads.

Although there has been no proof of this poster, or anyone in the local area actually doing exactly this, it’s not something that is uncommon.

Dog theft (and animal theft in general) has been on the rise, according to Animal Wellness Magazine. Just this past week in Youngstown Ohio, a family had their pit bull puppies stolen from their home, some of which were later listed for sale on Facebook.

Regardless if the post is true or not, it’s better to be safe than sorry and always keep an eye on your pets and implement security measures to avoid such situations.

Sours: https://ellwoodcity.org/2017/12/18/bizarre-post-appears-on-local-craigslist-pet-classifieds/
Tips for Getting Pets off Craigslist

I'm the eldest. - Well, tell me, please, where is Econ. - Mr. President went hunting and will arrive only in the evening. He also ordered to get you ready for the evening.