is an R package that quickly and accurately summarizes raster values over polygonal areas, commonly referred to as zonal statistics. Unlike most zonal statistics implementations, it handles grid cells that are partially covered by a polygon. Typical performance for real-world applications is orders of magnitude faster than the package. 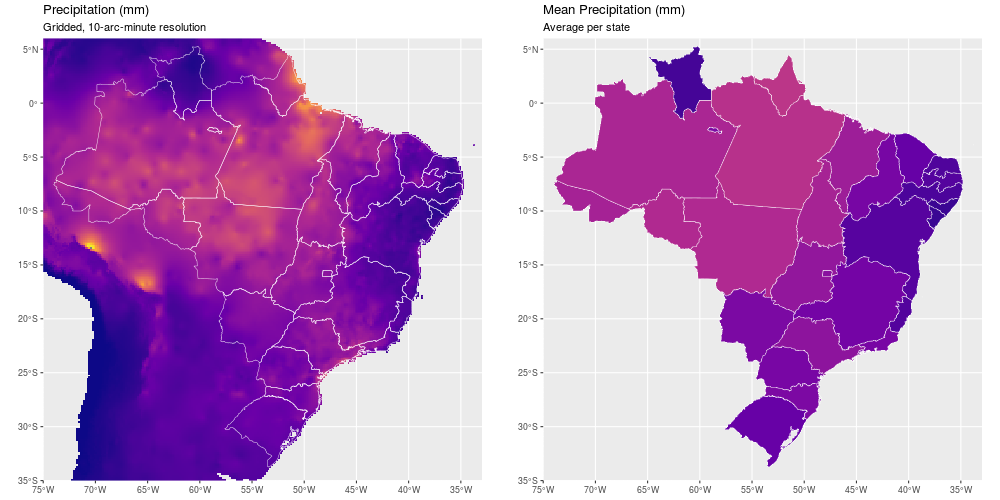 The package provides an method that operates analogously to the method in the package. The snippet below demonstrates the use of this function to compute monthly mean precipitation for each municipality in Brazil.

can summarize raster values using several named operations as well as arbitrary R functions. Where applicable, a named operation will provide better performance and reduced memory usage relative to an equivalent R function. Named operations are specified by providing a character vector with one or more operation names to the parameter of .

The following summary operations are supported:

Two additional summary operations require the use of a second weighting raster, provided in the argument to :

Weighted usage is discussed in more detail below.

An example of a built-in function with the appropriate signature is . Some examples of custom summary functions are:

allows for calculation of summary statistics based on multiple raster layers, such as a population-weighted temperature. The weighting raster must use the same coordinate system as the primary raster, and it must use a grid that is compatible with the primary raster. (The resolutions and extents of the rasters need not be the same, but the higher resolution must must be an integer multiple of the lower resolution, and the cell boundaries of both rasters must coincide with cell boundaries in the higher-resolution grid.)

We can correct for varying cell areas by creating a weighting raster with the area of each cell in the primary raster using the function from the package.

Performing a weighted summary with the and operations is as simple as providing a weighting or to the argument of .

The area-weighted mean precipitation calculation can be expressed as:

With the relatively small polygons used in this example, the error introduced by assuming constant cell area is negligible. However, for large polygons that span a wide range of latitudes, this may not be the case.

An equivalent to the usage above could be written as:

Or, to calculate the area-weighted mean precipitation for all months:

A multi-raster summary function can also be written to implement complex behavior that requires that multiple layers in a be considered simultaneously.

Here, we compute an area-weighted average temperature by calling with a of minimum and maximum temperatures, and a , of cell areas.

In the example above, the summary function is provided with a data frame of values (containing the values for each layer in the stack), a vector of coverage fractions, and a vector of weights.

In some cases, it is desirable for a summary function to return multiple values for each input feature. A common application is to summarize the fraction of each polygon that is covered by a given class of a categorical raster. This can be accomplished by writing a summary function that returns a one-row data frame for each input feature. The data frames for each feature will be combined into a single data frame using using or, if it is available, .

In this example, the mean temperature for each municipality is returned for each altitude category.

can rasterize polygons though computation of the coverage fraction in each cell. The function returns a with values from 0 to 1 indicating the fraction of each cell that is covered by the polygon. Because this function generates a for each feature in the input dataset, it can quickly consume a large amount of memory. Depending on the analysis being performed, it may be advisable to manually loop over the features in the input dataset and combine the generated rasters during each iteration.

An example benchmark using the example data is shown below. The mean execution time for was seconds, vs for . Timing was obtained from execution on an AWS instance.

Results from are more accurate than other methods because raster pixels that are partially covered by polygons are considered. The significance of partial coverage increases for polygons that are small or irregularly shaped. For the Brazilian municipalities used in the example, the error introduced by incorrectly handling partial coverage is less than 1% for 88% of municipalities and reaches a maximum of 9%.

Although is fast, it may still be slower than the command-line tool. However, some efficiencies, such as the simultaneous processing of multiple layers in a , are only possible in .

Installation requires version or greater of the GEOS geometry processing library. It is recommended to use the most recent released version () for best performance. On Windows, GEOS will be downloaded automatically as part of package install. On MacOS, it can be installed using Homebrew (). On Linux, it can be installed from system package repositories ( on Debian/Ubuntu, or on CentOS/RedHat.)

A Robust Zonal stats in QGIS can be implemented with PyQGIS. Following code was run with your layers by using a filter to select only ID_sub.pat between 19 and 27 (showed in your image).

After running code at Python Console of QGIS it was obtained this result:

where at first column are raster values, at second column weight factor and at third column id Polygons feature. You can observe that for polygons 20,21,26,27, its factors is always one (as expected). In other cases is proportional to intersection of Polygons feature with grid representing raster.

Results were corroborated with Value Tool and QuickWKT QGIS plugins and they were as expected.

Zonal statistics is a useful tool that allows you to determine arbitrary statistics from raster pixels that intersect with, for example, a polygon from a vector layer. Most of the time, we have a default selection of several statistics in the software GIS such as maximum, average, minimum value, and so on. But what if we want to calculate a statistic that we have invented? In the software GIS it is not impossible, but it requires a lot of work , e.g. Modeler. Luckily we have R, where you can do it in a function:) Anyway, let&#;s start with simple things. We start the raster library, where there is the extract function, which can be used to extract the values of the raster pixels that are in the given vector:

We initialize the rgdal library, which we will use to load vector data:

We load a raster file and a file with a vector layer, e.g. from the free layers (in our case, DEM and a layer with districts from Mazowieckie Voivodeship):

Using the extract function from the raster library, we can extract the DEM cell values that are within the first two districts, for example:

The variable h generated is a list containing the elevation values for a given district in its individual elements. We call these values with:

For example, if we want to count the average height value for a given district, we need to add the attribute fun = mean to the extraction function:

When we call the variable h_mean in the console, we see that it is already an array of values: